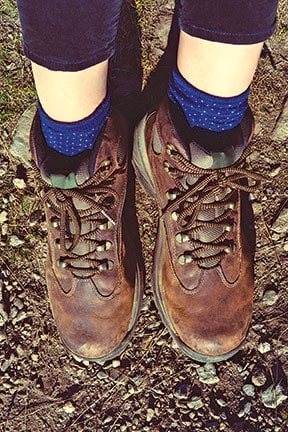 trails – whether they carry all of their gear and camp on the trail, or just pack a lunch and pull on sneakers for a leisurely day hike. For me, a casual hiker, the revelation came with my first Appalachian Trail hike near the Mason-Dixon Line. I realized I could come back on any weekend, pick up where I left off and hike another five or seven miles and call it a day – or camp for one night and be back at work on Monday. It is even possible to hike by day and find a nearby hotel by nightfall.

The point is, the trail is practically in our backyard, and the options for taking advantage of that are endless. From Howard County, the entire Maryland stretch of the Appalachian Trail can be reached easily by car for a day hike, entering through any of the 38 trail heads between Pennsylvania and West Virginia. I can’t check out of my regular life for months to take a hike. But I can take a weekend now and then.

The Appalachian Trail starts in Maine and ends in Georgia, snaking along the Appalachian Mountains for approximately 2,190 miles, about 41 of which are in Maryland. The trail enters the
state from Pennsylvania at the Mason-Dixon Line (a sign post marks the spot) and proceeds in a mostly southwest direction through woods and mountain paths to the Potomac River, then winds along the Potomac until crossing the Winchester and Potomac Railroad Bridge into West Virginia near Harper’s Ferry. 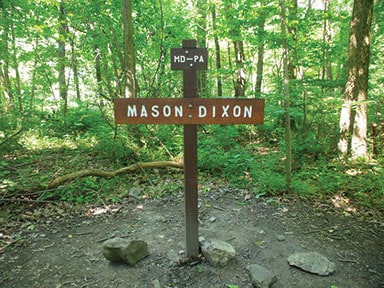 Entering the trail at any point puts you into a quiet stream of life that runs parallel to the modern world, but isn’t completely cut off. Most of the trail is under a tree canopy. You’ll probably take off your sunglasses, the better to see the intricate pattern of ferns, the subtle shades of foliage, the brushes of wildflowers like dots on a painting, and the sweet, juicy raspberries that grow on brambles and are free for the picking.

Vast stretches of open space buffer the trail from roads, yet there are frequent points where hikers must cross a main road – even the Baltimore National Pike and Interstate 70 (via bridge, no need
to dodge highway traffic). More often, it’s a quiet road that’s as idyllic as the trail itself. Blazes are painted onto trees to mark the path at any point where it isn’t clear, and at most road crossings, there are clear signs to direct you to the next trail head.

I take some comfort in knowing that if someone in my party were to need help, we could get to a road and flag down a car. It’s possible to know ahead of time which sections of the trail are challenging and which are easy, but even on the easy parts, there are rocks and roots to trip on. There are streams, but always bridges over any deep ones.

You will pass a few other groups and exchange a polite hello or more, if you each feel like it. If you have your phone with you, it might ring. For better or worse, I’ve never lost cell phone reception
on my limited forays into the trail, but I’m sure it will happen at some 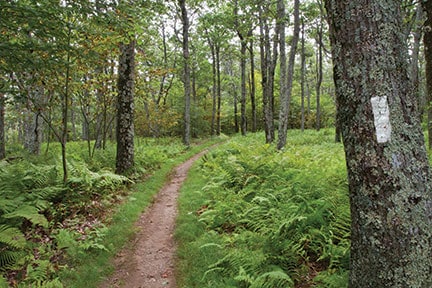 Hikers come from all over the world, but locals who live near the trail seem to take advantage of it, too. A large network of volunteers and club members maintain the trail and offer advice to hikers, whether online or on the trail itself.
The “2,000-milers” are thru-hikers who have gone the full length of the trail, and between 15,000 and 16,000 people have accomplished that, according to the Appalachian Trail Conservancy.

Some hikers try to set speed records, but rushing along the trail doesn’t appeal to me or any other hiker I know. I’m there to escape and explore, to have conversations with the friends and family in my group.

I would not rule out hiking a stretch twice before going on to a new one. In fact, I have repeated the same five-mile stretch from my first hike on the trail because it’s close to a Jesuit retreat center that I visit about once a year. This doesn’t allow me to boast that I’ve done more of the trail, but there is something nice about getting to know a piece of the trail, to remember certain spots and feel at home on a path that belongs to all of us. 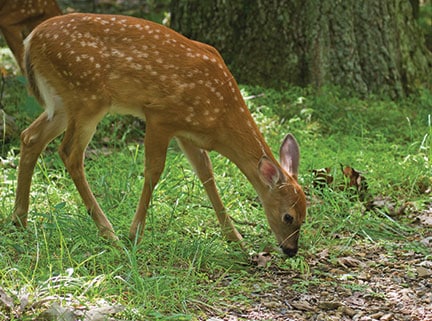 The last time I went hiking in July, it was with a cross-generational group from St. Ignatius Church in Baltimore, as part of a weekend parish picnic the church has each year at the Jesuit-owned Bellarmine Retreat Center just over the state line in Waynesboro, Pa. Our party had one woman in her 80s and a few in their 70s and 60s, as well as young adults, teens and elementary-
age children. Those in the group who were feeling tired or light-headed went back earlier, while the rest of us forged on for another mile or so, stopped for a water and restroom break at Pen Mar Park and headed back to the picnic for a welcome jump into the swimming pool.

I convinced one of the women in my group, Sherri Currie of Catonsville, to join my relay team in the Baltimore Running Festival. She had never run more than three miles, but I was huffing and puffing to keep up with her, even though at the time I was training for a half marathon. I asked her what she did for exercise, because she was killing all the uphill portions of the trail.

“I have four kids and a tall skinny house,” she said. “I go up and down stairs all day.”

She did join my team, and when we looked at our pace splits later, she had the fastest pace of all.

Your best bet is to work from the official Appalachian Trail Conservancy website, appalachiantrail.org. Some links will take you to websites hosted by volunteers and others, but if 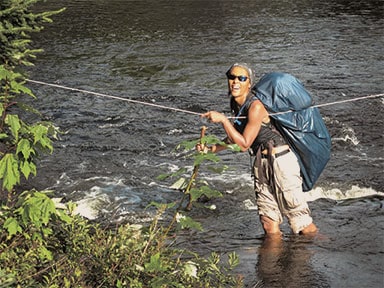 you get there directly from the conservancy’s site, you can trust it.

HOW TO GET THERE AND BACK TO YOUR CAR, TOO

From the conservancy site, go to the Explore the Trail menu, which includes transportation options – where to park and how to take advantage of hiker shuttle services. Many hikers simply have one person in the group park at the end, and then all drive to the starting point.

A hiker in reasonable shape could walk the whole Maryland section of the Appalachian Trail and either mark that as an accomplishment, or just the beginning. Trail heads are near such landmarks as High Rock and the Washington Monument (near Boonsboro) and state roads such as Maryland 77 (Foxville Road). One that includes several parking spots is in Myersville, Md., along Baltimore National Pike.

MapMyRun.com is a great way to plot the miles on the trail.
You can start anywhere in the middle of Maryland, but if you like to start at one border and work your way to the other, you can start at either:
The North End, and go south and west: Pen Mar County Park, near Highfield and Cascade, Md., two-tenths of a mile from the Mason- Dixon Line. Go south on the trail, which has a side trail that dead ends at High Rock after about three miles, and will put you at the top of a tremendous scenic lookout point. From there, even if it’s on your next trip, start at High Rock and go back to the main trail, and down as far as Maryland 491, Raven Rock Road, in Smithsburg, another 3 miles, for a total hike of 6 miles, much of which will be rocky, so do some homework and read what other hikers have to say about it.

The South End, and go east and north: Just across the bridge from Harper’s Ferry, start at the C&O Canal Towpath (on the Maryland side of the bridge) and proceed eastward on the path along the Potomac River, and eventually north toward Weverton Cliff. It’s a 10-mile stretch, most of it along the river. Here’s one description on everytrail.com:everytrail.com/guide/ harpers-ferry-to-weverton-cliff.

And if you want to do all 40.5 miles in one long weekend or a week, backpacker.com features the trail with a few tips for where to stay.  backpacker.com/trips/ maryland/appalachian-trail-harpers-ferry-to-pen-mar-road.

The Appalachian Trail Conservancy has an online interactive map, but it’s best to do some cross-map-plotting between Google Maps, Map My Run and the trail maps. The trail is visible on these larger maps, but you have to zoom in pretty close before it shows up as a faint gray or white trail. appalachiantrail. org/home/explore-the-trail.

You can purchase printed maps from the Potomac Appalachian Trail Club store and explore other resources there, as well. patc.net/PATC/Store/PATC.

Thousands of people have hiked the trails and blogged or contributed to trail and hiking websites by posting their review of a trail.

Don’t let the lack of hiking shoes keep you from starting small. Running or other athletic shoes will be fine for moderate and dry terrain.
If you know you want to do more hiking, get fitted at a store that has a good reputation and will give you a guarantee.

I hated traditional hiking boots, which I found stiff and heavy. They gave me a bruise on my shin after one day of hiking. I finally found the minimalist hiking boots made by Merrell, and they are much more comfortable, while still giving me ankle support.
Whatever hiking shoe you get, make sure it’s waterproof. *