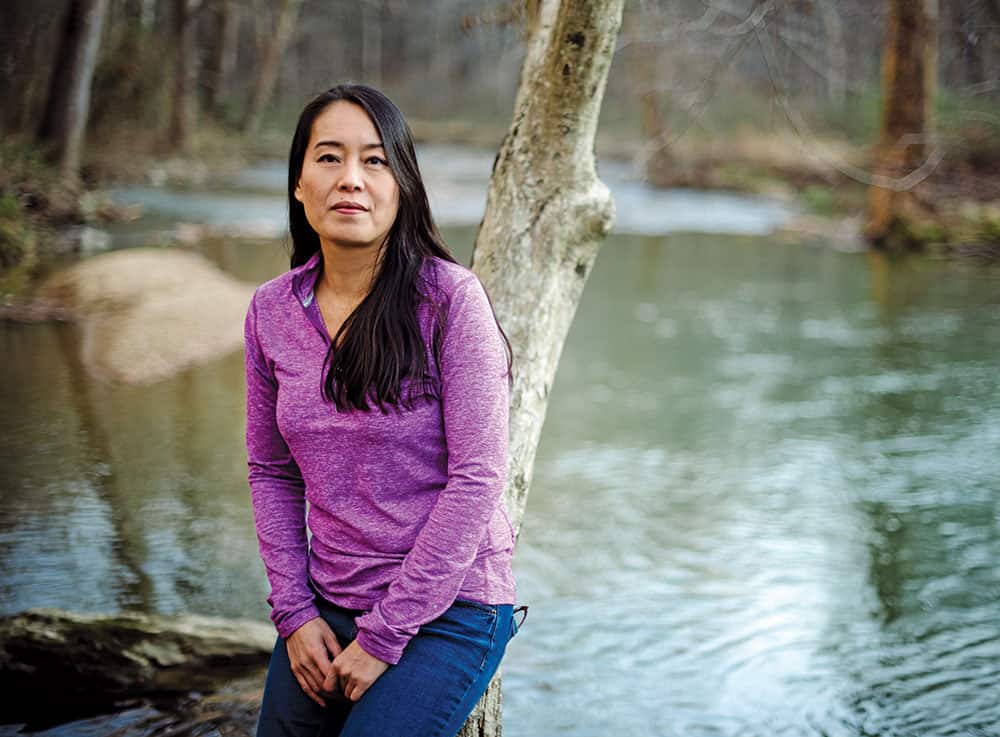 Hye Yeong Kwon, born in Inchon, South Korea, came to the U.S. with her family when she was 4. She grew up in Baltimore, where she attended Western High School and went on to graduate from the University of Maryland. She is executive director of the Center for Watershed Protection in Ellicott City, where she has worked for 23 years. The center does much of its work in the Chesapeake Bay, but has national reach. Through research, education, design projects and membership, the organization works to protect, restore and enhance streams, lakes, estuaries and bays. The nonprofit promotes and develops the best practices for a comprehensive watershed approach. In June 2018, The Baltimore Sun published Kwon’s editorial questioning the sagacity of reopening the businesses on Main Street in Ellicott City after the second flood there in as many years.

Q: What brought your family to the U.S.?

In South Korea, school isn’t free, and my parents couldn’t afford to send the four of us to school. They came to the U.S looking for opportunities. We immigrated to West Virginia of all places and my father got a job as an apprentice furniture maker. We were there three or four years, and then moved to Baltimore City. I went to Western High School, the all-girls public school. Then I started at Brandeis University, but I was very young•I’d graduated high school at 16•and it was a hard adjustment for me, so I ended up finishing at University of Maryland.

We grew up in the city, but my dad would take us out occasionally to go fishing or enjoy nature. Those were some of my favorite times as a kid. We’d go to parks•Gunpowder, Patapsco, Sandy Point.  I loved it. Along the way, I got into science; it was my favorite subject. I majored in biology at Maryland. I first worked for a drug research company. In a year I pretty much knew this is not the job for me. I’m glad somebody does drug research. It just wasn’t for me.

Q: When did you first get to work in nature professionally?

When I started at the center as assistant director, I got out to look at streams and watersheds and I said, ‘Ok, this is something I want to do.’ This job encompassed my love of nature and the outside. And I got to walk in streams.

Q: Why did you walk in streams?

Some of the best work I’ve done is walking streams and seeing the human impact. You count the fish in a stream and look at the species. You can see the correlation between land development and the type of fish. And when we see pollution directly flowing into the stream, we can see how it affects the quality of the fish that are able to survive. I walked a lot of streams all over the East Coast. Having a systems approach to looking at land and water is important.

Q: What do you mean by a systems approach?

The study of a watershed is looking at the land area and not just the point it drains to. So it’s looking at forestry, land use, conservation, the built environment and animals within it. It’s all of those things. Watershed science is about the connectivity of all those elements.

Q: What were the issues contributing to the floods in Ellicott City?

Downtown Ellicott City has several things going against it. One, is it’s built in the flood plain. If you look at natural stream behavior, you need a flood plain for guess what? The floods. The way it’s designed with all the buildings instead of what would normally be trees, it doesn’t absorb the rain water along that corridor. The second thing is climate change. The issue of more dramatic weather is real. Believe me, I hate it. I hate talking about it. I hate the fact that it’s a reality that we are dealing with. The third is there’s a lot of money in those buildings. I’m sure people don’t want to give up on it. The reality, however, is that there’s public money being spent on trying to fix something that is only somewhat fixable.

Q: What about digging up all the parking lots on Route 40?

I don’t know if that alone would be enough.

Q: Is your job more about biology or about the big picture, including planning?

We like to think we look at the big picture, while having a realistic approach about what people can achieve. Our main audience is actually practitioners, local government people, those who are tasked with the actual business of repairing and protecting. Say there’s a clean water act regulation that says you have to reduce the pollution by this much; how are you going to do it? We’ll help them figure it out. We give them the steps to protect and sometimes simultaneously restore their watersheds.

Q: I remember when the notion of pollution came on our radar, it was mostly about littering. Remember the crying Indian ad campaign?

Littering is still a huge problem. I’m a little sad they don’t still have those ads. People should understand that when they throw something on the ground it goes to the stream.

At the same time, the public’s knowledge base about what is actually going on in our waterways has increased. We know it’s not just trash, though that’s still a problem. Our streams are eroding so fast. When you develop an area that was formerly forest or land, it can’t absorb that water anymore. So it rushes at a much faster rate to the places that can absorb it. That’s why you end up with flooded Ellicott City. The water is trying to go where it wants to go. And it’ll pick up everything along the way: trash, bottles, oil, things you can’t see. As the quantity of water erodes the streams, it starts to destroy the stream itself.

Q: So it becomes a vicious cycle because then the water rises faster.

Q: If you could give readers five actions to make an impact on the local watershed, what would they be?

I don’t know if I can narrow it down to five, but I’ll try. The first thing is enjoy the outside. For me, understanding the importance of watershed ethics is understanding the value of the outdoors. By enjoying it people will learn how to protect and preserve. The second is learning more about what you can do. Next, things like volunteering for groups like the Patapsco Heritage Greenway is a great way to see what is going on. I’m sure that when people see the trash during a stream cleanup it’s a great wakeup call.

Another big thing is picking up after your dog. Why is that so important?  It’s not just about the mess. It turns out that dogs have an order of magnitude level of fecal coliform bacteria that is more than any other animal. It’s about 100 times more than humans. A little less than half the people in this country own a dog. I have a dog.

Q: What about lawns?

One thing you can do is slow water down and let it percolate on your property. You can build a bioretention pond or a backyard natural habitat, where you allow the storm water from your roof to stay in the yard. People also tend to overfertilize their yards.

Q: Why do Americans love their lawns so much?

I really can’t tell you, but I can tell you that they’ve done studies and the amount of fertilizer people use on their lawns far exceeds what farmers use on their crops.

Q: I’m sure plenty of homeowners associations have rules about lawns.

HOAs are the lowest form of government. That’s where it all starts. It would be great if they could encourage alternative yard designs, instead of everyone having to have lawns.