W hen the women behind Scoop & Paddle Ice Cream Company say their products are authentic, they’re not fooling around. Everything — from 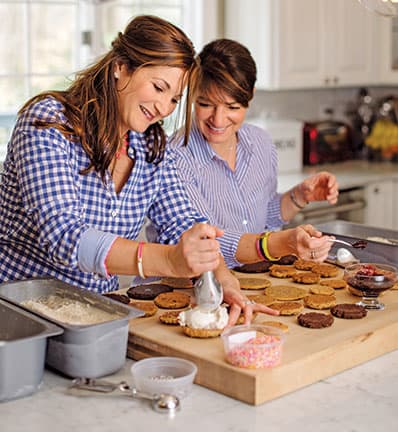 the crispy, chewy cookies that form their ice cream sandwiches to the rich, gooey salted caramel that swirls in the ice cream of the same name — is made from scratch by their own hands with all-natural, fresh, homemade ingredients.

Sisters-in-law Nadine and Renee Crisitello of Clarksville and the business they created ooze authenticity. For example, they refused to dye their mint chocolate chip ice cream green, no matter how much the white base may confuse the occasional customer.

“Some people open the lid and give it back, thinking we’ve handed them the wrong one,” Renee says with a smile. “But we assure them that it’s really mint, and they find out with the first bite.”

The fresh mint sourced in Baltimore is mixed with dairy from Trickling Springs Creamery in Chambersburg, Pa., and flecked with chocolate chips that Nadine creates using an Italian technique she learned at The Institute for Culinary Education in New York.

Choosing locally sourced products and making many ingredients themselves gives the Scoop & Paddle owners control over the end product.

Knowing what’s in every ingredient, says Nadine, helps them to create exacting flavors. Even so, what’s most important is the end result. “We want people to come back because they want to have our ice cream again and again,” she says.

Scoop & Paddle is currently sold from a bright red 1973 Volkswagen transport van at several Howard County farmers markets. The business partners lovingly nicknamed the renovated vehicle Tira, named for the Crisitellos’ favorite dessert, tiramisu, which happens to be one of the first ice cream flavors they worked on. 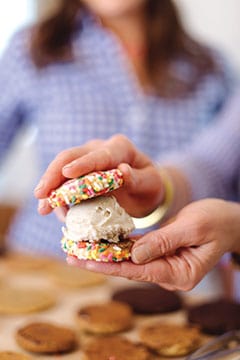 At weddings, birthdays or team-building events, they load confections onto a matching vintage pushcart.

Though they dream of a bricks-and-mortar shop, Nadine and Renee are pleased that after just one year of business, they’ve seen customers return week after week, to pick up a pint or three, single-serve cups or stacks of gourmet ice cream sandwiches.

Signature flavors vanilla, chocolate, strawberry, salted caramel, mint chocolate chip, cookie dough, cobbler and two coffee flavors are always available. Seasonal favorites such as pumpkin, candy corn, Irish coffee or Lucky Charms are added depending on the season or holiday. The coffee flavors, Rise Up and Shine and Rise Up Espresso Chip are named for Rise Up Coffee Roasters in Easton, which supplies beans.

Nadine and Renee both concoct flavors, following suggestions from their own children or other family and friends. Popular creations have included chocolate covered strawberry, key lime pie and blueberry-lemon ice creams.

Through trial and error, the two Crisitellos have learned what works best. Nadine first studied how to make French-style ice cream and custards in culinary school. After her aunt bought her a small ice cream machine as a gift, she began making frozen treats for family and eventually desserts for clients of her personal chef business. 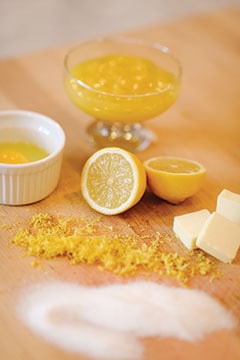 Clients clamored for more of Nadine’s ice cream, often saying it was the best they had ever eaten. “So my husband said, ‘maybe you should sell it,’” and from there, the idea of Scoop & Paddle was born.

Nadine and her family, including husband, Anthony, and their teenage daughter and son, have lived in the Clarksville area for more than seven years. For most of that time, Nadine pestered Renee to move from New Jersey to Maryland, too. About three years ago, the pestering finally worked, and Renee and her husband, Darrin (brother to Anthony), moved with their twin girls (now 10 years old) to a house just down the street from Nadine. 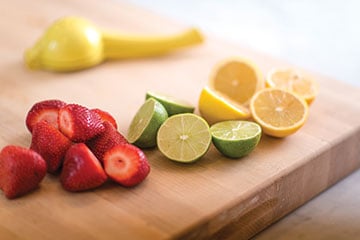 The sisters-in-law act more like actual sisters, finishing each other’s sentences and speaking about each other with high praise and lots of love. They’ve known each other for decades, first meeting when Renee was a teenager. Her now-husband brought Renee as his date to his big brother’s wedding to Nadine, and the two young women became fast friends and confidants.

“I feel so blessed to have this relationship with Renee,” Nadine says. “I would choose her as a friend any day of the week. At the end of the day, I can look at something that’s frustrating and realize it’s not that big a deal. We’ve learned to look past the small things.”

Renee smiles at Nadine and agrees. “It’s very special what we have.”

Business planning began soon after Renee and her family moved to Maryland. Both Renee and Nadine attended Ice Cream University in New Jersey, learning the finer points of how to use commercial machines and the science behind ice cream making. They spent the week developing a recipe book for Scoop & Paddle, working out ratios and understanding their business road map. 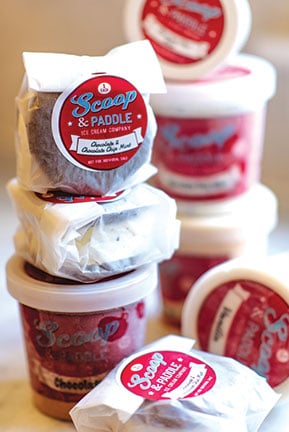 “That course helped us get over the hump of is this a dream or a reality,” Renee said. “For me it was the first time I understood how to get from small scale to the larger scale of producing.”

Nadine followed up by attending the world-renowned Ice Cream Short Course at Penn State University’s Berkey Creamery, where ice cream luminaries such as Ben Greenfield, founder of Ben & Jerry’s, studied the craft, “from cow to cone.”

After all the training, business planning and recipe writing, it was time to get into the kitchen: Nadine taking charge of ice cream, and Renee uncovering the secret of baking the perfect ice cream sandwich cookie.

The cookies took months to develop and put Renee’s baking skills to the test. Batch after batch, she tried a bit more sugar, a bit less butter, more egg yolks or fewer. Some cookies were too puffy, others spread out on the pan.

“I wanted to create something that wouldn’t break your teeth, but could stand up to the ice cream inside,” she explains.

The kids all benefited from the trial and error and ultimately cheered when Renee figured out the perfect formulas for her chocolate, oatmeal, chocolate chip, sugar and sprinkle cookies.

Nadine remembers cranking out batch after batch of her popular salted caramel ice cream, until what resulted was the perfect flavor and texture. Mouth feel is very important to the Crisitellos or Cristellos, as are classic flavors.

“The trend in the ice cream world in the past six to seven years is to be as outrageous as possible and create flavors that are truly unexpected,” Nadine says, “But sometimes that is not delicious. We want to make flavors that people really want to eat. Our ice cream is pretty classic, but done better than you’ve ever had before.”

Even though they acknowledge that creating an ice cream business is more fun than many other jobs, it’s still work. 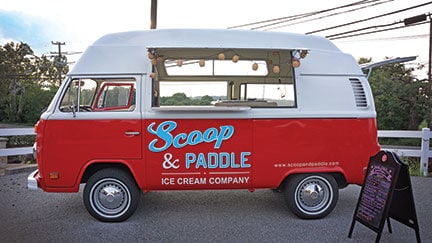 “We’re really proud of what we’ve accomplished so far,” Renee says. “To say it’s been easy would be a lie. To structure a company, write a business plan, get all of the licensing … it’s been very challenging; there’s just so much to learn.”

But the most important thing, Nadine says, was learning to not give up.

And they find those workarounds together. “I don’t think I would have been able to do this by myself,” Nadine says.

For both business owners, the chance to demonstrate to their children that you can succeed and make a living doing something you are passionate about is priceless.

“The way I see it, you’re going to be working for a very long time, so it better be something that you love,” Nadine adds. *