Edith Cord’s unimaginable childhood has led her to gratitude 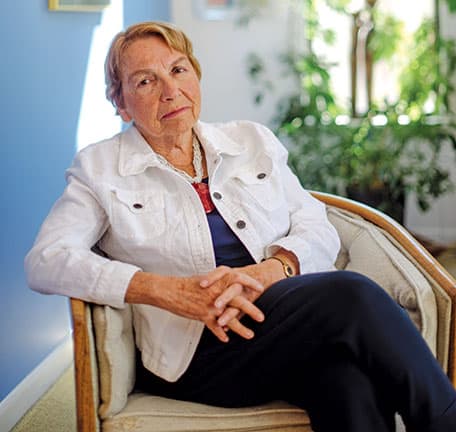 Edith Cord, 88, spent six years as a child and teen fleeing and in hiding from the Nazis during World War II. After the war ended, she made up for lost time by studying for—and passing—the first half of the French baccalaureate in just one year, earning the second half and eventually a master’s degree at the University of Toulouse. She came to America in 1952 and, a decade later, joined the foreign language department at Indiana University in Pennsylvania, teaching French and German. She later became a broker and financial planner, earning her CFP designation in 1982. In 1985, she moved to Columbia, where her youngest of three children completed high school.

She is the author of “Becoming Edith: The Education of a Hidden Child,” published in French under the title “L’Education d’un Enfant Cache.” She also writes fairy tales to help survivors of trauma (To read one, go to hermindmagazine.com).

Q Can you describe your early life?
I was born in Vienna. My father had a clothing store for men and boys. We moved to Italy when I was 9. Mussolini was in power, but he didn’t bother us. I was very happy in Italy. But when Mussolini got together with Hitler and formed the Axis, he began to promulgate the same laws that existed in Germany. My father lost his job, my brother lost his job, my school was closed. At 10 years old, one of my first lessons in life was when they want to keep you down they keep you ignorant.

Q What did you do?
We tried to emigrate to the U.S., but it had closed its doors. This was 1938. We entered France illegally and the French gave us political asylum. We managed to survive by the skin of our teeth.

Q Is that when you went into hiding?
It was a gradual tightening of the noose. (One day) there were two French policemen at our door. They said to my father and brother, who was now 17, you have 30 minutes to get dressed, pack your bags and say good bye to your family. That was the last time I saw my father. They were taken to a French concentration camp, and from there to other camps, and in the summer of 1942—the Germans kept records—they were shipped to Auschwitz.

Q And what happened to you and your mother?
We were kicked out of Nice; it was forbidden for Jews. We managed to get a residence permit in a little village. I was 13 with no school, so I worked as a farm hand in the vineyards. In the village everybody knew who I was. But the police in a nearby town kept tabs. Resources were diminishing.

I went into hiding—not like Anne Frank. I got a fake birth certificate and I was hidden in a Catholic school for girls. Eventually I was found out because a girl took a school picture home for the summer and someone from my village recognized me.

Q Then what?
I spent the rest of the year moving. I moved 13 times in one year. I got sick. I came down with diphtheria. The first stop was a school, then I was taken to a home for Jewish kids outside of Lyon. Just after I left, the Germans arrested all the children there and shipped them to Auschwitz.

Then one day they said, we’re going to try to smuggle you into Switzerland.

Q Like “The Sound of Music.”
But it wasn’t that pretty. We walked through the woods. It was quite an adventure. There were 30 teenagers, and a 5-year-old. We had to carry him, he was always crying. I had a reunion several years ago with eight of the survivors. I didn’t recognize any of them. This elderly gentleman with snow white hair walks up to me and says, “I’m the 5-year-old.”

Q It’s hard to even imagine.
Hiding under a false identity was not a simple matter. I was still not used to being on my own; my mother was very domineering, very Germanic. I hadn’t ever been away or done anything on my own.

Worse than that was the constant lying. I had to be on my guard at all times. This created a constant state of tension and loneliness because I could not share my thoughts with anyone. I couldn’t even keep a journal; it was out of the question. If someone were to find my notes it would put me and everyone around me at risk.

My kids have told me that I talk in my sleep. That was one of my great fears, that I would give myself way in my sleep.

Q But you made it.
When we got to Switzerland, we kissed the ground, most of us. This was 1944, I had been hunted for six long years. When I came back to France, I was 17. I had a triple task. One, I had to confront the horrors. The depravity to which civilized people sunk. Remember: Germany was a Christian country. The people who did it were not ruffians; they were chemists, they were engineers. Two, I had nothing. I had no money. My mother had rented a place in the boonies, a long walk from town. I had to make a living. Three, I needed an education. At the age of 17 I had a 6th grade education.

Eventually I was given a scholarship for one year, if I could catch up on six years in one. To get the French Baccalaureate, you had to know algebra, three-dimensional geometry; I had to write a literary research paper, I had to know French literature. I did nothing but study, study, study. I didn’t sleep much. I used to take off Sunday morning,to go for a walk or in the summer to go swimming or boating. That was the only break. And my mother didn’t clean the house, so I had to do the laundry and clean.

Q Was your mother depressed?
I would say she was probably chronically depressed. She would have benefited from some help.

Q You have told me that you are politically conservative.
I am very much in a minority in Maryland. I think most of my friends don’t appreciate what they have. You don’t appreciate the level of prosperity, the level of security and the level of opportunity. We take it for granted and we shouldn’t. We have those things because of the wisdom of the founding fathers, the institutions they created that are still supporting this country, through all our travails. I would like our children to understand that foundation. That’s important, and we need to protect that heritage.

Q Yet you have liked living in Columbia.
One of the first things I liked about it is the Interfaith Center; that is what makes it a melting pot. We work together, we each believe whatever we believe comes in the next life, but in this life we work together and we share. We get along, we work together. What more do you want?

Q Your life has been filled with challenges. Do you ever get tired?
I got tired yesterday. I spoke at St. Timothy’s an Episcopal high school for girls. When I give a talk, I spend myself. By the time I’m done I want to sit down and have a little something.*

Edith Cord writes fairy tales for children to help with healing. Here is one of her stories.
Jonathan & His Grandfather