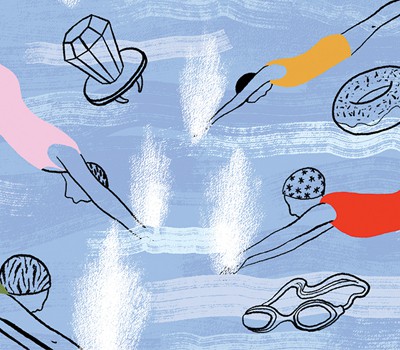 KIDS ON A SWIM TEAM PRACTICE BOTH INDIVIDUAL AND GROUP EFFORT

For many, summer is synonymous with rest—beach vacations and long mornings, lazy Saturdays spent lounging by the pool. It’s a break from school, a break from sports and occasionally even a break from work.

Unless, of course, you are one of the hundreds of Howard County families who participate in a neighborhood swim league.

For these families, mine included, summer is synonymous with chlorine, donuts, ring pops, lost towels, lost goggles, lost voices and the exhilaration of watch­ing your child beam with pride after beating a personal record.

I didn’t grow up in a swim team family, so when we joined the Columbia Neigh­borhood Swim League three years ago, I wasn’t sure what to expect. My biggest motivator for joining was my older daugh­ter, who, despite years of swim lessons had reached the age of 6 still refusing to put her face in the water. Peer pressure is a powerful force, and I knew that if all her friends were doing it, she’d do it too.

She did. With characteristic stubborn­ness, she not only put that face in the water but within a week of practicing, she was able to swim a full, qualifying lap of free­style. She also braved plunging into an unheated pool on 60-degree days, waking up at 6 a.m. on summer Saturdays, and pushing through her fears of the jarringly loud buzzer at the starting line.

She learned how to stop swimming in a circle during the backstroke event, how to congratulate friends who swam faster than she, and how to set goals for her alone to beat.

For my part, I learned that our kids are a lot tougher than we give them credit for, that watching a 6-year-old swim a 90-second lap can be more thrilling than watching Michael Phelps pull off a world record finish, and that, yes, there are times when spend­ing $7.50 for two warehouse store donuts and coffee from a Thermos is worth it.

I can’t pretend to love those early Sat­urday mornings, when I have to wake my kids up shielding myself from flailing limbs with a pillow. The weekday practices are tedious and frequently involve tears. After late-spring swims, when the air is cool and the water freezing, I’m expected to provide fleece bathrobes, hand warmers and hot chocolate with whipped cream and marshmallows.

But I do love the lessons my kids are learning about personal achievement and sportsmanship. Kids don’t get many chances to learn how to strive for indi­vidual excellence while also being part of a team—swimming is one of the few sports that gives this opportunity. And I love the community we’ve developed with other families in our neighborhood. While our kids run wild between their events, we adults have the chance to just sit and get to know one another—a rare opportunity in our overscheduled lives.

We officially became a full-fledged swim family when my younger daughter, now a first-grader, joined the team last year. Like her sister, she hated putting her face in the water. Unlike her sister, who has a powerful drive for achievement, this one is mainly motivated by doing her own thing. Instead of conforming to the status quo of qualifying strokes, she developed her own version of freestyle, emphasis on the “free.”

With her left hand holding her nose, she paddled one-armed through the water. Occasionally, she’d take a break mid-lane to flash us one of her joyous smiles. Fre­quently, she’d stop and stand two feet from the finish line, just for the heck of it.

I don’t recall if my little one has ever made it through a meet without a dis­qualification. I do know that she ended every single race beaming with pride for making it all the way across the pool. Personal achievement means different things to different daughters, I guess.

Practices for this season are right around the corner. I’m stocking up on beach towels, Swiss Miss, sunscreen and goggles. The kids are reminding me that, on meet days and morning practices, donuts are an acceptable breakfast. Rather than plan­ning for relaxation this summer, we’re in for eight weeks of chaos and competition. And I wouldn’t have it any other way.