Jana VanderGoot, a University of Maryland architecture professor, gets up from the table where she has been sitting sidesaddle and points to a 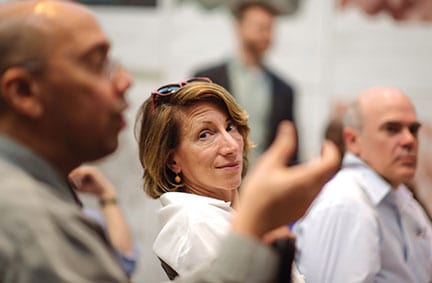 map of Owen Brown Village in Columbia. The maps covering the walls in the high-ceilinged, open-concept architecture studio were created by students as starting points to discuss revitalizing James Rouse’s original concept of a self-sustaining community.

VanderGoot points to one titled “A Mixed Salad,” which shows the village demographics by both race and income. “It turns out, it’s truly mixed,” she tells the class. The community has people of many races throughout all income levels. “Columbia really is a nice melting pot.” That was indeed one of Rouse’s visions.
But things change over time. What seemed revolutionary in the 1970s needs tweaking in 2016. Several students move closer to a map. “We want to connect the village center with Lake Elkhorn,” offers student Aren Knudsen. A winding road, Cradlerock Way, divides the community in half, disrupting flow from the tennis courts to Lake Elkhorn; the community also lacks commercial diversity and needs an anchor. “The Giant was supposed to be the anchor,” VanderGoot says. “But there’s no incentive to go to Giant, the town center, because there are dozens of chains just down the road.”

The original vision for Cradlerock Way, explains student Renata Southard, “was to serve as a pastoral ‘country’ ride through the center of the village.” But the busy road actually breaks the community in two, she points out. Walkable communities not busy roads, it turns out, create ideal society.

A half-century ago, Columbia was famously envisioned by developer Rouse as a group of self-sufficient villages, each with a central gathering place, for people of different income levels and races and religions to cross paths and interact. VanderGoot’s students are tasked with looking at how well this vision is
holding up and seeking contemporary ways to rethink the vision.

“We want to develop a denser urban fabric,” VanderGoot tells the class.

This collaborative approach to problem solving is at the core of The Partnership for Action Learning in Sustainability (PALS), which teams University of Maryland students from a range of disciplines with communities. This year, the Howard County government and the Columbia Association (CA) have partnered with PALS to generate ideas and solutions for sustainability issues facing the county. PALS has paired UMD students with projects in Frederick, Ellicott City and College Park.

Sustainability is a broad concern. “A lot of people think of sustainability only in terms of water running into the Bay,” explains Southard. “But sustainability is also social and economic.” When considering an idea, she says, students ask, “Can we use the existing buildings on the site? What are the energy costs to rebuild? In the long term, would the idea be viable?”

Throughout the semester VanderGoot’s students have met with county officials, including Randy Clay, an urban planning expert who was a consultant on the 2010 Downtown Columbia Plan.

Across the College Park campus, Nicole Mogul, a professor in the Young Scholars Program, discusses how undergraduates in her PALS course come up with ideas. Her students are conducting research on attitudes about commercial energy efficiency in the county. “How do we encourage Wegman’s, for example, to reduce their carbon footprint by changing the parking lot lighting?” asks Mogul, whose academic work involves partnering universities with communities. One way is through empathy, she says. 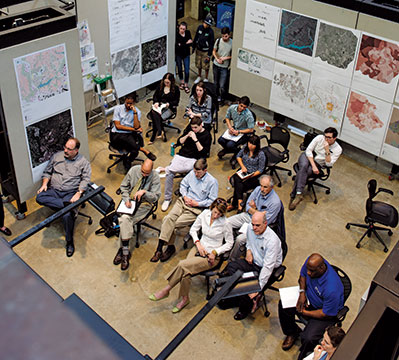 Mogul’s class met with Laura Miller, county energy sustainability projects manager, to learn more about commercial energy use, and then assessed empathy levels within the county by conducting interviews. “Students might ask cashiers, a logistics manager, a head of produce – what motivates them to do something different?” says Mogul. The class was scheduled to present their interview findings to the county at the end of the semester.

When it comes to sustainability, Columbia and CA have an admirable track record. The Downtown Columbia Plan won the first ever Smart Growth Community Award from the Maryland Sustainable Growth Commission (MSGC) in 2013. And the county boasts several active green organizations, including Live Green Howard and Feed the Green Bin.

“As things changed over time, we have to always ask ourselves, ‘is the vision as viable as the community wishes? How can we do better?’” explains Jane Dembner, director of planning and community affairs for CA. “The university brings research and analysis and fresh ideas. We thought that combination was a winner.”

Students also recognize the collaboration’s value. “In an academic setting so many of our ideas are hypothetical or theoretical,” says Southard. “By working directly with an actual client we get to deal with things that are inconvenient – like cost or storm mitigation. It’s a nice reality check. The clients, students and professors hammer it out together. ”

“Students end up with these beautiful illustrations that show in a very concrete way what this place can be,” says VanderGoot. “And the client bites back,” she says. “The program offers students an opportunity to make a real impact and to be invested in seeing this through.”

After the 15-week semester at Maryland had ended and final grades were posted, collaboration for the Owen Brown project continued. “There are often funds left over to allow grad students and others to meet with city councils and communities to help see those ideas to completion,” says VanderGoot. A previous project in Salisbury, for example, allowed the city to hire two students over the summer to complete a master plan for a project.

Some projects last more than one semester. Columbia celebrates its 50th anniversary next year, and CA hopes to use findings from another PALS collaboration as part of the celebration. A Maryland anthropology class in the fall of 2015 conducted 30 interviews as part of an oral history project that examined why people came to Columbia as part of its early social experiment. This semester the collaborative teams are now analyzing those interviews, both transcripts and videos. “We expect to really get a better understanding of the pioneers – why did they come, why did they stay? How do they feel about the social experiment that is Columbia? ”

Whether a vision lasts 50 years, or beyond, the key word today is “sustainable.” Says Southard, “How do we create places that people would actually use over time? That’s the main concern.” *