For Students with Individual Needs, the Right Teacher Makes a World of Difference 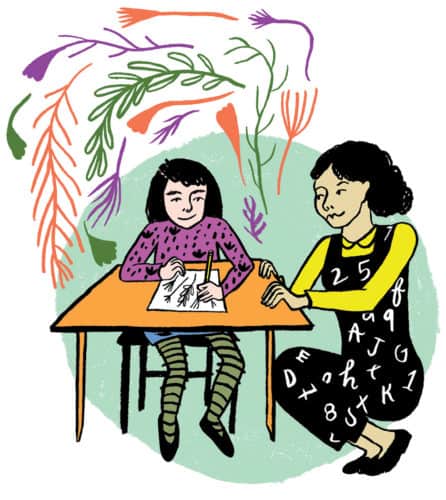 When my daughter was 3, she came close to setting a family record. She nearly became the first child ever to be kicked out of preschool.

After a few strained conversations with her preschool teachers, my husband and I accepted what we had been denying for months: Our daughter showed signs of autism. We needed to get her tested.
We did, and the results were clear. Though she is high functioning, our daughter is on the autism spectrum. We were devastated. While it changed nothing about our child, the diagnosis changed how my husband and I perceived her place in the world. What we thought was a “threenager” phase became a preview of challenges and limitations that would persist throughout her life.

She wouldn’t be growing out of the behaviors that were making preschool so difficult. We began to wonder how she would ever survive the wilds of full-day public kindergarten when she was struggling so much in a small, private nursery school.

As time passed and our daughter’s first day of kindergarten drew near, our trepidation grew. By the time Back to School night arrived, I was an anxious, tearful wreck.

And then, I met my daughter’s teacher. I knew at first sight that she was the one. She wore a handmade jumper designed from fabric patterned with letters and numbers. She was the picture-book-perfect kindergarten teacher, a real-life “Ms. Frizzle.”

And this teacher, as good as she is, is not an anomaly.

We knew from our daughter’s diagnosis that her fine motor skills were delayed. By the time my daughter reached first grade, it became clear that she needed extra help. I set up a meeting with the first grade teacher, the lead special education teacher, the school psychologist, an occupational therapist and the principal.

I expected to have to explain my daughter’s quirks and how they affect her in the classroom. But I didn’t have to, because the teacher had such insight into the way she learns that she was able to contribute more to the conversation than I was.

The special education teacher picked right up on what the homeroom teacher was saying and put together a plan that was not only tailored to my daughter’s needs, but was creative and empowering.

The principal looked over my daughter’s handwriting samples and understood immediately what our concerns were, adding his own interpretations and recommendations.

Everyone in that room cared. They cared about my daughter as a person, not just as a student. They wanted her to succeed in becoming her best self.

My daughter enters fourth grade this year, and the story is still the same. Her teachers have all recognized her talents, her quirks and her struggles. They have also all recognized—and more importantly, appreciated—what makes her special: her sweetness, her creativity, her unique perspectives. They have both guided her and challenged her—and because of them, she is thriving. It’s a gift beyond value to have people like these in your child’s life.

But it’s a gift that comes with a price. Good teachers are the product of policies and budgets that support them. The teachers at my daughter’s school came by their compassion and their commitment to children naturally, but their specialized knowledge and skills have been honed by a school system willing to invest. And they are part of a well-funded district that has traditionally limited class sizes and provided ample support staff, including special education teachers.

With the federal education budget proposing massive cuts in education, many target funding for teacher training, class size limits, after-school programs and benefits for our nation’s poorest schools. My daughter’s school, which has the highest poverty rate in Howard County, is in danger of losing the programs that have enabled its teachers to meet students’ exceptional needs.

So as we begin a new school year, I’ll be sending my kids in with the extra boxes of tissues and glue sticks and pencils and hand sanitizer. And I will also be calling my representatives, asking them to advocate for the right of all students to a quality education. Because teachers are our best allies in helping our kids reach their potential, I owe them all the help I can give.

Krista Threefoot lives in Columbia with her husband, two daughters and a rescue dog. She blogs at andanotherthing.com.