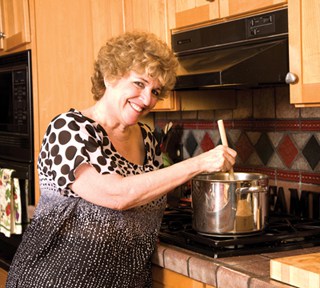 A bowl of steaming soup is comfort food that never goes out of style. In many families, soup is a tradition that evolves through the generations. Building a good soup from scratch can involve elaborate ingredients or utter simplicity. Most will agree there’s something comforting about a pot of soup simmering on the stove on a cold day. The aromas can chase away the winter chills, while the flavors draw people close. We spoke with three local chefs about their favorite soups and offer their memories, as well as their recipes. Go ahead, make some soup. And enjoy the season.

When Lisa Park, owner of An Loi Vietnamese Restaurant in Columbia was growing up, making soup was a time for family bonding. “When Mom made soup, all the kids helped,” she recalls. “But we weren’t really helping, we would play with the dough and flour would be everywhere.” While soup was a staple on the household menu, back then, she says, making it was a 24-hour process.

“To make the noodles from start to finish, we had to break the rice and grind it into powder.” These days, there are plenty of Asian grocery stores that sell rice noodles in different sizes and textures, she points out. “My grandmother used to say that long noodles means a long life.” Park and her family are Korean but she points out that all Oriental food is quite similar in many respects. 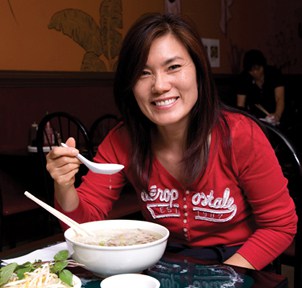 Park purchased An Loi in 2005, but before she bought the restaurant, she was a devoted customer. The previous owners trained her staff to make the soup – long a favorite among the customers. Then Park added her own twists. And judging by the enthusiastic reviews online and the sheer volume of soup sold at the restaurant, the recipes are a hit.

Park estimates that of 300 or so daily customers, about 65 percent order soup. It’s a healthy and warming meal, and, she says, with about 450-500 calories per bowl.

An Loi’s specialty is pho, a spicy soup, which actually means “noodle soup” in Vietnamese. The name, however, may have derived from the French pot au feu, or beef stew. Pho originated in early 20th century Vietnam and is thought to be a hybrid dish to please the French living there at the time.

Pho is pronounced something like “fuuuh” with a drawn-out vowel, a sound that can be difficult for Westerners to say correctly because of the tone. Luckily, pho is easier to eat than to pronounce.