Serenity On the Shore

An art-filled weekend in Chestertown

is a mix of relaxation and activity

My trips over the long and narrow Chesapeake Bay Bridge come far and few between, not 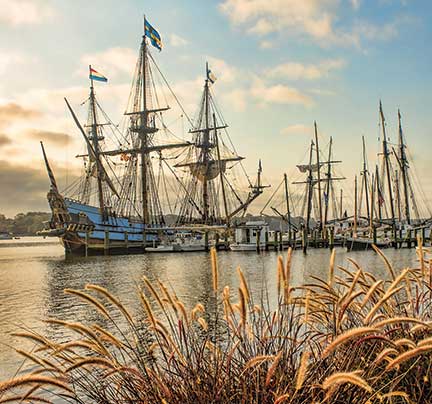 uncommon for one whose center of gravity lies somewhere inside the Baltimore-Washington corridor. I’ve called the Free State home my entire life, but Maryland’s Eastern Shore is as distant to me as the coasts of Oregon.

As I travel on the other side of the bay, views of the golden fields, sprawling farms and romantically quaint vineyards lure my eyes from the road. The blue horizon replaces the concrete and steel skylines I’m used to. Little do I realize the scope of delights that await me when I first set foot inside Kent County’s Chestertown.

Established in the early 1700s, this small port town and home to historic Washington College was a colonial Royal Port of Entry that once rivaled Annapolis. Although the historic riverfront houses remain, Chestertown, situated midway between Washington, D.C., and Philadelphia, now bustles with a mix of retirees, college students, snowbirds and weekenders who flow in from the area’s nearby metropolises.

Despite the town’s diminutive size (population just over 5,000), the number of activities on any given weekend can dizzy even the most fast-paced adventurist, as I learn during my weekend stay. I arrive on a Saturday morning and bring with me my appetite. In addition to the brick-and-mortar haunts where you can grab a meal or wet your whistle, the weekly farmers’ market boasts treats for the tummy and eyes alike: sweet and savory baked goods, fresh picked produce and flowers, and an explosion of art.

I’ve grown accustomed to seeing jewelry or other small handmade crafts at farmers’ markets, but when I stop by vendor Stephen Green’s stall, I can’t help but linger. 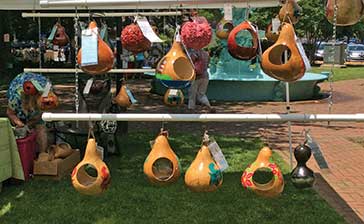 “You’re a chainsaw artist,” I blurt out. His collection of rustic, bark-laden furniture and animal-inspired wood sculptures somehow make perfect sense against the backdrop of the town’s Fountain Park lawn. It reflects Chestertown’s place at the center of where art, history and nature converge.

Just behind him, the same spirit is reflected by Wanda’s Wonders, a tent decorated with colorful gourds transformed into bird houses.

“It’s a family-run business,” says Wanda Gorman, as she painstakingly carves and hollows one right in front of me. Her brother Victor grows them on his farm on the Eastern Shore. Gorman and her husband, Jimmy, and their kids then transform the vine vegetables into functional, interactive works of art.

In fact, much in this town marries art and community.

Carla Massoni, owner of the Massoni Art Gallery located at 203 High Street, moved to Chestertown from inside the D.C. beltway when her now grown children were young.

“We see the arts – writing, painting, photography, sculpting as a vibrant part of our community,” explains Massoni.

Because there are so many living-working artists in town, you never know who you’ll bump into, she says. “You can go around the corner and have coffee with an author.” And the RiverArts Studio Tour in October offers a behind-the-scenes look at how art comes together.

For all these reasons, Maryland recently designated Chestertown as an Arts and Entertainment District – one of only two dozen in the state. 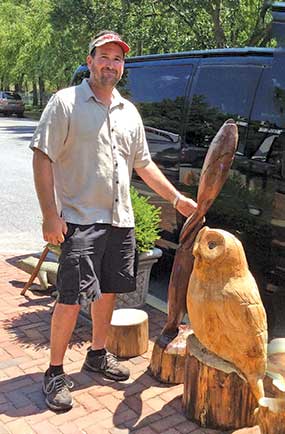 “Designation of the Town’s A&E District is a major step in the planned revitalization of Chestertown’s downtown and waterfront,” says Mayor Chris Cerino. “The downtown arts scene in Chestertown has grown by leaps and bounds in the past decade,” he says. Cerino credits local institutions like RiverArts (a nonprofit community arts center) and the Garfield Center. “The state’s designation validates what many of us already know,” he says. “That Chestertown is fast becoming a regional arts destination.”

The blossoming community that exists today is a far cry from the segregated, southern municipality that saw Freedom Riders and civil rights demonstrations just 50 years ago. The African-American Walking Tour of Chestertown chronicles the areas rich African-American history and features structures such as Janes United Methodist Church, whose congregation dates back to 1831, and the Grand Army of the Republic (G.A.R.), explains Larry Samuels, a member of the Diversity Dialog Group.

Chestertown native Airlee Johnson recently returned after having spent 40 years away. “Since I’ve been back, I’ve seen all the new people, new energy. There are always activities,” she continues. “I don’t miss the Chestertown of my youth, but I love this new one.”

Massoni and Johnson are not the only Chestertown residents seduced by the lure of harmonious, small-town, coastal living.

Tom Martin left behind a career on Capitol Hill to pursue his dream of being a bookseller in the town where he and his wife had vacationed for years. He now owns The Bookplate, one of Chestertown’s two independent bookstores.

“It’s a college town and a retiree town. It’s a comfortable place with high energy – an artistic scene, a literary scene and outdoors scene,” says Martin. 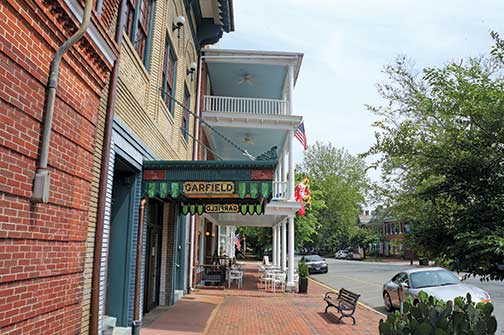 All of those scenes manage to converge in late October during Downrigging Weekend, a festival devoted to tall ships, wood boats and the river. The events feature musicians, authors, filmmakers and history buffs.

Chestertown has proven to be more than I imagined; there’s serenity in the unusual blend of relaxation and busyness.

At the heart of Chestertown, says Martin, “There are great people.” It’s a down-to-earth community, he says, “where everyone is trying to make it a special place and include everyone.”