TIFFANY SOTO MAY BE A WORLD-CLASS SIPPER, BUT AT HOME, SHE PREFERS TO SNIP

Tiffany Dawn Soto is the Beverage Manager of the Four Seasons Hotel in Baltimore. Certified by the Court of Master Sommeliers, Soto also studied in Japan to become a Sake Master Educator, going on to become the corporate sake director for the trendy restaurant chain Sushi Samba. Recently, she and her family moved from Las Vegas t 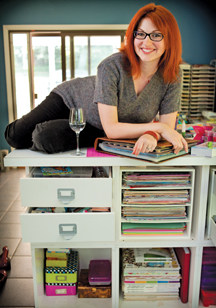 o Elkridge, where Tiffany pursues another passion: scrapbooking. She has a crafts room, she says, that “looks like four Jo-Ann stores.”

Q. Your sake credentials are pretty impressive. What did it take to get there?

Because I’m a woman, people expect to hear this huge story of triumph, fighting and clawing my way to the top. I won’t say it was easy to get certified in Japan, and to be accepted by the community. But it wasn’t supposed to be easy. This is something that has been closely guarded for 2,000 years. Fewer than 10 Americans have the Kiki-zake-shi certification. I think there’s one other female in the U.S., she’s from Japan.

When I started sake, I was told it was a waste of time. But since then, sake imports doubled, and doubled again. They’ve slowed down in the past few years, due to the Tsunami and the economy.

I liken sake to where wine was in the early 80s. It was very bourgeois. Bartles and James brought wine to the masses. I’m sorry to say, but wine coolers said it was OK to have wine in any circumstance. They made it approachable so people went on to find out more.

Sake is scary for people. You need a delicate hand to introduce it and the humility to know how to talk to someone without making them feel like an idiot for not knowing. A lot of sommeliers have a pretentious approach, and some people like that. Sake is never that way.

Q. What was the hardest part of the certification process?

Bow some more? Apologize for my dialect? When you taste a sake – about 12-18,000 are produced every year, you have to identify the rice (from 102 strains), what prefecture it’s from, the type of yeast used for fermentation.

Q. Are you a supertaster?

Yes. People thought I was crazy. I’m from San Diego and grew up on Baja food. I cannot eat cilantro. I throw up. Most supertasters can’t eat cilantro. To me it tastes like soap. In 9th grade we took a litmus test, either you taste nothing or it’s incredibly bitter. Only two of us tasted bitter.

Q. Does being a supertaster mean you enjoy food more than most, or is it the opposite?

Did you play any instruments? I was a performing arts major in high school and played saxophone. When a musician listens to the orchestra, you only hear the one note that’s off.

Q. So is this a gift that you’d give up?

Sometimes I say yes. There are foods I can’t eat, like cucumber and melon. These are strong flavor profiles that I need to look for in sake. Cucumber tastes like grass and a little perfume. I have difficulty with bitterness. I don’t like beer in any taste or form, but part of my job is to drink it. I never drink coffee or tea.

Q. How do you deal with eating during the holidays?

I’m always the cook, so that’s good. Most of my food has alcohol in it: turkey brined in white wine, cranberries with cognac, the pumpkin cheesecake and sweet potatoes have bourbon. Don’t worry, all the alcohol cooks out. I want to be like Martha Stewart when I grow up.

Q. Well that’s a great segue to the scrapbooking thing.

I’ve thought a lot about why I have this attraction to scrapbooking. The long and short of it is, when I was almost 9 years old, my house burned down. I have no photos of my house or of my childhood. It was a family trauma, and this is my therapy. I needed a way to document my family. I know my house can catch on fire today, and my scrapbooks can go to the heavens. But I have everything stored in three digital areas – online, in a cloud and on hard drive.

Q. Sounds borderline obsessive, or even over the border.

I never want my kid to not have a history. My grandfather died shortly after our house burned down. So we lost what he knew too.

Q. How do you edit your life into a scrapbook?

It’s important to remember you can combine more than one visit or event on a page. I look back on the whole year and find the highlights, rather than trying to do things as they happen. I try to give it some context. Journaling is also important, and that’s private. I sometimes write on the back of the page. In one of my favorite pictures of (daughter) Evie she’s wearing a little winter hat; I wrote memories of where and when the picture was taken. It’ll be hers some day.

Q. Do you have any New Year’s resolutions?

I have so many resolutions this year. I want to make sure I document as much as I can. My daughter Evie had serious medical issues and spent months at a time in hospitals, and I didn’t document it. I have no pictures of her for months at a stretch. I don’t have any pages from Evie’s toddler years. That was a mistake. It wasn’t until she was six that I realized the illness was part of her life too. It’s not just about documenting the good. It’s about everything that makes you who you are.

I’m also launching a blog this year, Vino Mom dot com. It’s about trying to find balance between being a professional (alcohol drinker) and this domestic person I want to be. One section will have wine reviews, and another will have product reviews and advice for moms. I have whole articles to post on trying to turn your kids into foodies, instead of whiny brats who only want chicken nuggets.

Q. And do you have any advice when it comes to resolutions?

Be realistic. Do I want six pack abs from going to the gym or to make more scrapbook pages? I could be the world’s best housekeeper this year, or spend more time with my kids. *