A little known fact: Five hundred bras laid end-to-end can stretch about two miles. If you don’t believe it, check out Maple Lawn’s annual Pink Night, an October evening devoted to the fight against breast cancer. 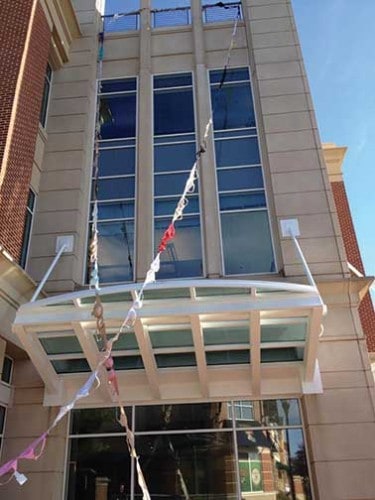 Mary Jordan, owner of Bra-La-La in Fulton created the event in 2007 for Maple Lawn merchants to join forces in raising money for breast cancer.
Proceeds go to the Maryland-based Red Devils to support families affected by breast cancer. Helping the worthy charity is the main point of Pink Night; the fact that it’s fun is a bonus.

The highlight of the night is the “bra stretch,” involving stringing together more than 500 gently used or brand new bras that Jordan has collected from manufacturers and customers over the preceding year. In the past, the bras have stretched for as far as two miles along Maple Lawn streets. “Last year, we went to the top of the Raytheon building, the highest point in Maple Lawn, and created a breast cancer ribbon out of bras,” says Jordan.

Posters with facts about breast cancer are placed along the route of the stretched lingerie. The Reservoir High School Band comes to play, and restaurants serve pink drinks with a percentage of the proceeds going to the Red Devils.

Improving Our Philanthropy Through Diversity, Equity and Inclusion