MAN WITH A PLAN

WHAT’S ON HIS MIND

INTERVIEW BY Martha Thomas     PORTRAIT BY André Chung
Milton Matthews became president and CEO of the Columbia Association in June. He was most recently the CEO of the Reston (Virginia) Association, a planned community with more than 65,000 residents. He has also worked as a city manager and director of finance and administration for the city of Webster Groves, Missouri. Matthews has masters’ degrees in city and regional planning and public administration. 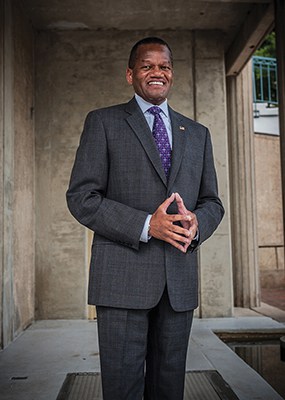 QHow is the planned community of Reston like Columbia?

The communities are very similar. Both were built on the new town idea, designed to be inclusive. There was a lot of focus on gathering, meeting places, plazas, with a downtown at the core. But the overall idea was that someone could be born there and live there for their entire life. The housing stock would accommodate their needs over time. It allowed for different economic status of individuals, and the communities were job centers.

QHow did that vision work out?

During the time that Reston was founded, integration was not a common practice in the Commonwealth of Virginia. Minorities couldn’t just buy a single family home in Northern Virginia back then.

I grew up on the eastern shore of Virginia, in a segregated area when I was a kid. Northern Virginia has a little more tolerance than the rest of the state. The idea was due, and it worked very well. Columbia might have been a little more open to the idea. The communities have been models nationally and internationally.

QHas the model held up?

Oh yes. Now Columbia is approaching 50 years old. I don’t want to sound like a sound bite, but its future is just as bright as its past. The same principles that drew people to the community in the 1960s are drawing people here today.

People look at Reston and Columbia as having an exceptional quality of life. Not all municipalities have that sense of community. That’s the magic. They’re inclusive, they’re welcoming. That attitude is second nature to the residents.

QNot all of Howard County is Columbia. The farmland that surrounds it is becoming more populated with developments, some with large homes.

Howard County is reflective of trends all over. I’m a big believer in the desirability of a community that offers opportunities to people of different economic status. You don’t want to have a cookie cutter county where everything is on a grid pattern. It doesn’t bother me when you leave Columbia and find the large acreage lots. Those residents sill appreciate Columbia and come here for restaurants and theaters.

QThe revitalization has brought some exciting new businesses to the lakefront.

Restaurants and other businesses realize they have a large potential market in Howard County, so are coming to the market rather than expecting the market to come to them. Haven on the Lake is innovative. It offers something different to residents and to Howard County in general. It’s about understanding demographics and believing that this concept can work.

QWhen the community was designed in the mid 60s, the social upheaval for women was on the horizon. How did the community plan accommodate changing roles of women?

The community framework that allowed for civil rights and integration allowed for women’s rights too. That framework has been very accommodating to changing social roles. There are community centers, localized grocery shopping and playgrounds.

The Columbia Association is a not-for-profit that provides a lot of services. One of the programs we do very well is preschool and after school programs. That’s not a common practice for a municipality to be involved in. It’s my understanding that service goes back many years. With two working parents, a child has to have a constructive place to go before and after school.

Accessibility to the beltway and larger institutions was important to two-parent working households. We’re roughly half way between Baltimore and D.C.

QWhat will the residents of Columbia gain from the new master plan?

Every so often, communities go through a phase of redevelopment. As we get to the 50-year mark of Columbia, it needs to be revitalized. Times have changed; residents have changed. The downtown will be more walkable. We’re adding 5,000 housing units downtown, designed to attract different demographics – whether single professionals or empty nesters who want to move to a condo in the downtown area.

QAre the paths still important to the plan?

One of the things we’re working on is connectivity. We want to make sure the pathways are safe and that people have good directions. We’ve developed apps for that. The paths are an important mode of transportation for everyone in Howard County.

QIs the philosophy that Columbia was built on still intact?

Columbia will continue to have a demographic mix that is the envy of other communities. The school system will continue to attract young families. But the housing units in downtown are designed for the millennials – who are using fewer automobiles. Downtown will have the amenities these younger people are looking for, including better transit. Plus you still have the benefit of the location, between Washington and Baltimore. Some of the properties are adjacent to I-95.

QWomen in Howard County are involved with the community and business on many levels.

Yes, I’ve been extremely impressed, but I expected that. I grew up with three sisters; they are highly educated women. It’s the way I was raised. One of the reasons I left Reston is my wife had an opportunity to be city manager of Rockville and there is a residency requirement.

QYou are 60 years old. Is it unusual for a man in your generation to move for his wife’s career?

She has made sacrifices for my career. I did it without a second thought.

QThen you got the job at CA. Now what?

Barb is going to remain in Rockville. I’m going to move to Columbia. We’ll see each other when we can during the week and definitely on weekends.

QThanks for agreeing to be the first man interviewed for the What’s on Her Mind column.

I told my wife I was having an interview with “Her Mind” and she looked at me and said, ‘why do they want to talk to you?’ I figured we’d find out.

QWhat did you think we’d talk about?

I believe in accommodating working women with shorter working hours. I’m a big believer that family comes first. I have high expectations of myself and my staff. But if I have a meeting scheduled with one of my department directors and he or she comes in and says my child is sick, I never hesitate. I want to make sure they have a life outside of work. That’s part of creating a good work environment.