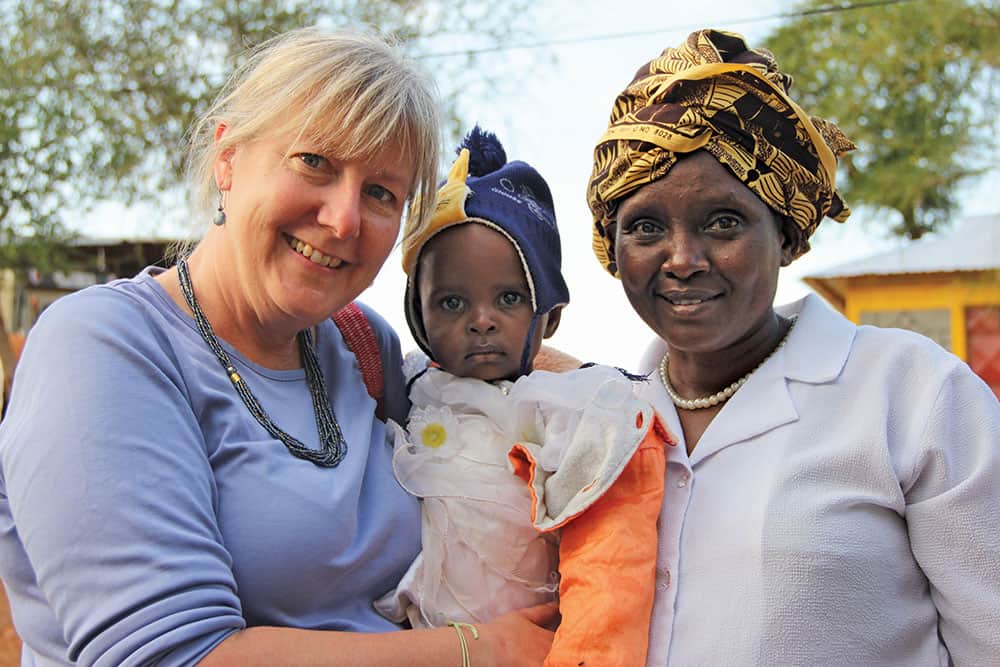 As runners gather before the start of the 2019 Kenya Connect 5k in Ellicott City March 30, there will already be a winner among them. What she runs is the Elkridge-based nonprofit that connects students in developed countries with their counterparts in rural Kenya. And what she won is a nationwide award that will help advance its mission.

Last fall, financial services organization TIAA selected Sharon Runge, the executive director of Kenya Connect, as a TIAA 100 Difference Maker. The honor came with a $10,000 donation in Runge’s honor to the nonprofit she has led since 2014, though she was a donor and volunteer for seven years before that through her development work with St. John’s Parish Day School.

“I went to Kenya as a volunteer in 2007 to see what they were doing and to broaden the connection with St. John’s,” Runge says. Students at the Ellicott City school were already corresponding with students in Kenya as pen pals.

“I thought it would be my only trip to Kenya,” Runge recalls. But while she was there, she says she knew she’d return. And return. “I just felt called to this work.”

Wherever she looked, she saw possibilities, despite the poverty, the lack of electricity, running water and toilets•not to mention inadequate resources to teach the children English, an essential skill for those wishing to pursue higher education. “English is their third language,” says Runge, “but it’s the language of the national (qualifying) exams.”

Kenya Connect has been able to enlist partners in schools and businesses•including PayPal•to remove barriers that kept children from making it to university exams and placement. The students and schools lacked some basic needs, like books and even hand-washing stations and latrines. Forget computers.

In addition to the robust pen-pal exchange, Kenya Connect has coordinated volunteers and sponsors to help the local community build a new solar-powered Learning Resource Center that has 30 networked computers.

“For most of these students, it’s the first time they have ever worked on a computer,” Runge says. “They figure it out so quickly, it’s amazing.”

Runge compares the Learning Resource Center to a library here in Howard County, with its thousands of books, some of which travel on a bookmobile to villages where children cheer its arrival.

While Nairobi, the capital of Kenya, is a modern metropolis, there is a great deal of poverty, says Runge. Wamunyu and other rural villages where Kenya Connect focuses its efforts, are likewise economically challenged, Runge says. Village residents work primarily as subsistence farmers and wood carvers, making the small animal figures, spoons and napkin rings that many Americans would recognize. A few own small businesses such as hair salons and butcher shops. 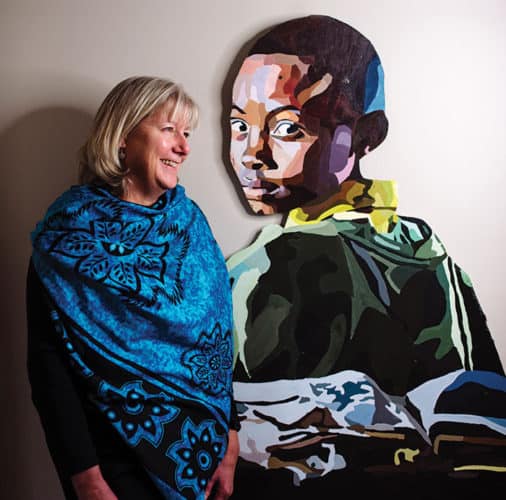 Sharon Runge stands near a gift painted by her daughter, Emma Runge, in their family home.

Runge, who lives in Catonsville, had an early career as an executive at colleges and universities in the United States, including Johns Hopkins University. She holds a doctorate from New York University and a master’s degree from Boston College, both in higher education administration. Work and post-graduate studies took her, her husband, Michael, and their two children all over the country, then back to Maryland, when she began working in development for St. John’s Parish Day School.

It was at St. John’s that Runge became aware of Kenya Connect, which is also registered as a nongovernmental organization (NGO) in Kenya, where it has a staff of  eight people led by co-founder James Musyoka. As executive director of the Kenya-based team, Musyoka is instrumental in building links and meaningful programs for the students, Runge says.

The organization began in 2002 as a cultural exchange, matching pen pals from partner schools in the U.S. and Kenya. Marylander Tim Gregory went to Africa in the 1990s to study world music and met Musyoka. The two hit it off and started a program with a handful of schools in Maryland. Students here wrote letters to their peers in Wamunyu.

The program now has 55 partner schools in Kenya, serving about 17,000 students. At any given time, students from 20 to 30 schools in the U.S., Great Britain, China and New Zealand correspond with the Kenyans.

Kenya Connect makes it possible for Kenyan students to keep up with their counterparts in other countries by breaking down barriers to education and providing enrichment programs.

The organization helps with education in other ways•along with checking books out of the library or bookmobile, for example, families can pay $1 a month for eight months to rent-to-own a solar-powered light, so kids can read after school.

The message, says Runge, is that even if parents cannot read themselves, they can still help their children learn. “We tell them, ‘We know you’re working all the time, so when you’re doing chores, have your child read to you.’”

Runge searches for books that will have some cultural significance to the students, such as Mama Miti, by Donna Jo Napoli and Kadir Nelson. The book is about Wangari Muta Maathai, a Kenyan who in 1977 founded the Green Belt Movement in Africa to combat deforestation and environmental degradation. In 2004, the author became the first African woman to win the Nobel Peace Prize. 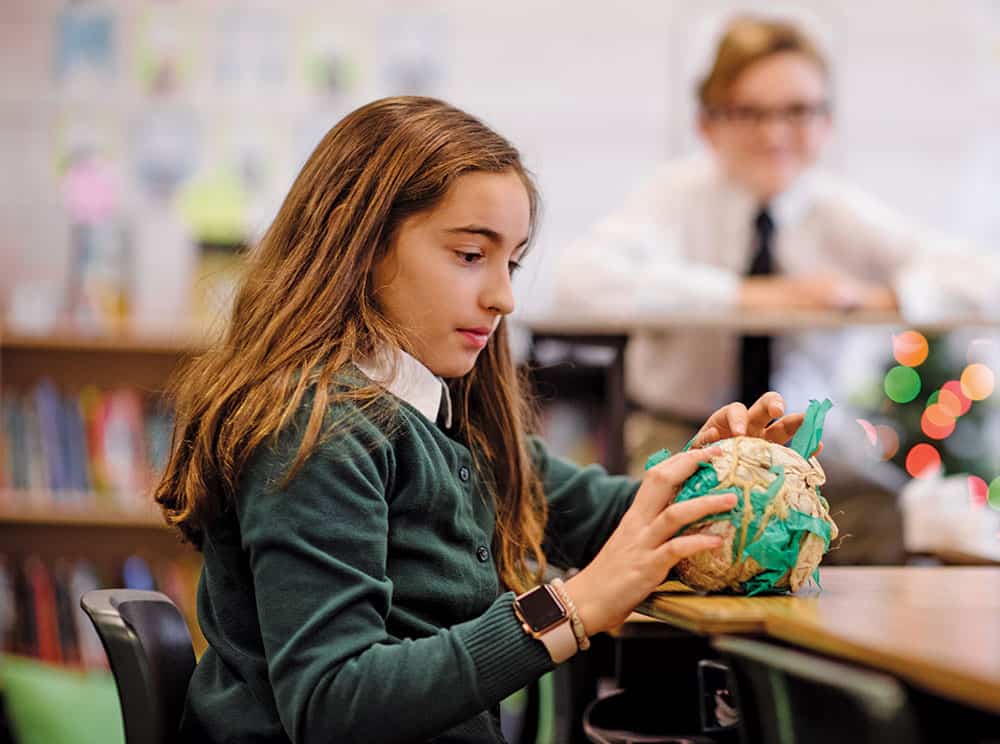 Kid-to-Kid Correspondence is Still the Core

The pen-pal program, consisting of letters handwritten by students, remains the core of Kenya Connect, Runge says. At one time, teachers would gather the letters and the organization would arrange to have them sent via the postal services, but that was expensive and could take many weeks. Sometime the letters never arrived at all, Runge says. Now, teachers scan and upload letters to a zip drive so the staff in Kenya can download and print them, she says. “It’s a lot cheaper.”

As a result of the correspondence, students come up with other ways to help their Kenyan friends. Arundel High School students helped raise money for the solar panels at the Learning Resource Center that opened in 2012, and a Girl Scout troop in Howard County collected and sent three dozen soccer balls to their pen pals, after they learned that most of the Kenyan kids were playing soccer with improvised balls made from wadded-up paper.

“Kids live very social lives,” says Runge. “They learn from each other.” Often children will draw pictures on the letters, sparking conversations about what their lives are like in their home countries. Kenya Connect, she says, is helping prepare all these students for the 21st Century.

The 100 Difference Maker Award was designed to celebrate TIAA’s 100th year specializing in retirement benefits for teachers, professors and others in nonprofit human services.

The company selected 100 people from among more than 4,000 nominees throughout the U.S.

The announcement of Runge as one of the awardees reads:

“In partnership with the Nairobi National Library, Kenya Connect has increased the number of books available to students and provided things like eyeglasses, menstrual kits and solar-powered lights to help support continued access to education. Reading broadens students’ horizons and heightens their aspirations, increases their proficiency in English and brings enrichment.”