HAVING A HIP REPLACED

TURNED OUT TO BE MUCH EASIER THAN EXPECTED 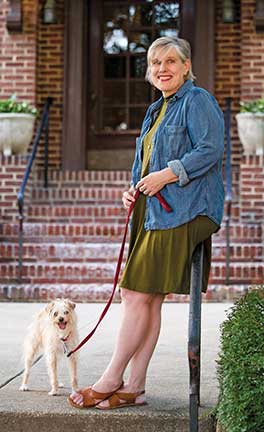 I was a doubter until the morning after my surgery – no wait, hours later. A physical therapist helped me ease my legs over the side of the hospital bed and, with the help of a walker, stand up. The habitual dull ache in my back, the pinch in my groin, the incessant pressure in my glutes – gone.

I’ve had uncooperative hips for as long as I can remember. As a toddler, I wore a contraption of baby shoes affixed with a span of metal that forced my feet to turn out, correcting the pigeon toes I’d been born with. I worked hard to get my knee over that third toe for a first position plié in high school dance class, and as an adult, when I did hip circles lying on my back in Pilates, I could hear an embarrassing “clonking” noise that seemed to echo through the room.

But it was the pain of the arthritis that finally did me in. After three years of sleepless nights, hikes called short and vacations that increasingly lacked abandon (with the exception of one cortisone-fueled ski trip), I agreed to the hip replacement I had been resisting. In my early 50s, I thought, I am too young. I had visions of my great aunt, who, in her mid-80s, stepped out of bed one morning to find her leg wouldn’t support her, fell and shattered her femur. After getting a new hip, she wore a ghastly 4-inch platform sneaker on one foot for the rest of her life.

According to Dr. Nicholas Grosso, 65 years of age was once the entry point for joint replacements. Two or three decades ago, says the chair of orthopedics at Howard County General Hospital, “if you got 10 to 14 years out of an average joint, you were doing well.”

Today’s artificial knees and hips are vastly improved, with lifespans nearly double what they once were, Dr. Grosso points out. “They’re not going to wear out as fast as they used to.”

Turns out, I’m part of the fastest growing demographic in the U.S. for knee and hip replacements. According to the American Academy of Orthopaedic Surgeons, the number of women aged 45 to 64 undergoing total hip replacements more than doubled – to more than 75,000 between 2002 to 2010. At the same time, the number of total knee replacements among women in that age group shot from 82,230 to 199,203. In 2010, more women had hips and knees replaced than men.

Even so, says Toni Keller, P.A., Joint Academy coordinator at Howard County General, the average patient age is about 66. In the early days of her 32-year tenure, Keller says, “We very seldom saw anybody under 60 for a total joint. Patients have gotten a little bit younger, a little bit younger.” 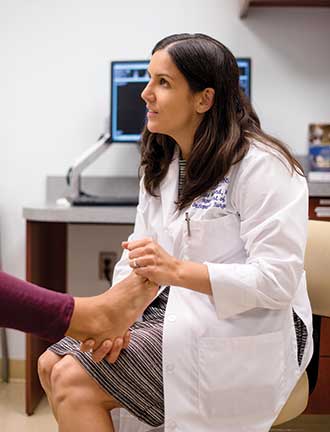 Baby boomers have high standards when it comes to maintaining physical activity, but it’s a double-edged sword, says Dr. Grosso. “Because (baby boomers) have been active so long, there are invariably injuries along the way,” he points out. And (surprise!) we’re resisting aging, says Keller. “People are active and want to stay that way. They want to go on vacation when they retire, and they don’t want to be in pain,” she says.

I was also fairly typical when it came to stalling my procedure. “There are studies showing that even though women have advanced arthritis, they tend to put off surgery,” says Dr. Casey Humbyrd, an orthopedic surgeon at Bayview Hospital in Baltimore. “Women are used to a certain amount of discomfort in life.”

Dr. Humbyrd mostly does ankles these days (she lives in Baltimore’s cobblestoned neighborhood of Canton and is no stranger to tumbles from high-heels – among her patients, of course), but she assisted on countless hip replacements as a resident in Odenton and Columbia. Replacement should be considered, not based on age, she says, but on lifestyle. “When you find that you’re stopping activities because of the pain, if every single day you’re thinking about your hip or your knee, it’s time to consider surgery.” Restoring comfort, she points out, means returning to physical activities like walking and cycling. “It’s about getting back to the things that will keep you healthy.”

In August 2014, after several years of arthritis pain, Seema Parekh of Ellicott City, then 51, decided to have knee replacement surgery. Though the pain began in her 40s, Parekh thought it might be related to a combination of genetics and the trauma from a car accident more than 25 years ago, when she had fractured her leg. More recently, she had undergone knee surgery after tearing the meniscus. “The pain was intense and I was limping a lot while walking,” says Parekh, whose leg would swell after a day of normal activity. Months before her surgery, she took a trip to see the cherry blossoms in Washington, D.C., but couldn’t make it to the Tidal Basin because of the pain.

Parekh tried several options before surgery, including painkillers and injections to lubricate the joint. Finally, her physician recommended knee replacement. Several months later, Parekh was able to walk the 2.7-mile Centennial Lake loop, and last spring she made that aborted trip to see the cherry blossoms with her daughters. “What a difference a year makes,” she says. “I was able to enjoy a whole day without having to say, ‘Girls, I need to sit down,’ or ‘Girls, why don’t you go ahead, and I’ll wait for you’ and things like that.”

Knee replacement is known to be more painful – and have a longer recovery period than hip replacement. Nine months after her surgery, Parekh reported being about 90 percent pain-free, and she considers her surgery a success.

I returned home – to my third floor apartment, no elevator – the day after my hip replacement. I’d been given a lesson on using the stairs, and the physical therapist had even suggested we take the precaution of setting up a chair on the second floor landing so I could rest between floors. My sweet 16-year-old carried a chair down from the dining room, but I didn’t need it after all, taking one careful step at a time, followed by a pause and a rest.

My mother, 77, who has both of her original hips and knees, came down from Maine for the first week of my recovery, refilling the pitcher of water by my bedside, helping with dog walking, preparing simple meals and completely reorganizing my kitchen cabinets and linen closets (I still can’t find the soy sauce). It wasn’t lost on me that my mom had also nursed my great aunt after her fall more than 30 years ago. A few days after my surgery, I stood as straight as I could with the help of my walker. “Does one of my legs look longer?” I asked my mother, the specter of my great aunt’s platform Ked looming. My mother laughed. “I don’t think so,” she reassured.

I’m four weeks into recovery as I write this, and, while still hobbling slightly, can walk on my own. I’m looking forward to exploring Copenhagen in the late summer and have already started discussing autumn hikes with friends.

According to Howard County Hospital’s Dr. Grosso, folks older than me require surgery to simply complete the activities of daily living. “They just want to be able to get around and do what they need to do,” he says. But that younger generation, meaning younger than 60, he says, “have demands on their lives that the older folks don’t have. They have younger kids; they still have jobs. We try to give them that ability back.” *