Knitting with like-minded women makes for the perfect weekend. Oh, and there’s yoga too. 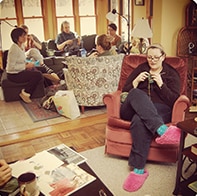 “I know, right?”  That’s what I told my friends, who looked at me with stunned appreciation when I described my recent weekend plans.

In search of a little TLC during a difficult time, I’d randomly searched some key words. Retreat. Yoga. Maryland. The unanticipated bonus was Knitting. I didn’t Google “a bunch of easy-going, smart and like-minded women” but if I’d done that, the results would have been the same.

The Blue Mountain Retreat Center is tucked in Knoxville, Maryland, up the hill from a stretch of the Potomac where it parts company with the Shenandoah. It’s not far from Frederick and the town of Harper’s Ferry is just over the river. But the place, with its unfussy buildings – one for lodging, eating and hanging out, one an open room with a sleek wood floor for tai chi, yoga, meditation, what-have-you – seemed so far from life as I know it that the 75-minute drive west could just as easily have been a flight across the country.

Beth Erhardt opened the Blue Mountain center in 2007 on land her parents had purchased in the 1970s – after they’d ditched their D.C. jobs for a more simple existence in what was, at the time, says Beth, “the boondocks.” Erhardt’s parents turned 100 acres into an organic farm, planted berry patches and fruit trees, and eventually handed off a 30-acre parcel to their daughter, who pursued her dream of creating an eco-friendly retreat center where she could also focus on massage and bodywork.

The center attracts all sorts of groups, mostly nonprofits – from members of Greenpeace to family reunions to a group of hearing-impaired scrapbookers – as well as the Tai Chi Yoga Knitters, which has taken over the place 10 times since 2009. 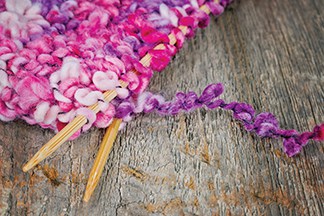 I was lucky enough to secure a spot for the weekend retreat – mainly because a recent renovation at the center has added a handful of beds, so the size of the popular group was more flexible. The main house has big windows and decks overlooking the property. There are several bedrooms, each sleeping anywhere from two to eight, with slender European style twin beds (a few of them bunks) made up with duvets. Bathrooms are shared.

I didn’t know what to expect, but I liked Erhardt’s voice on the phone. She seemed gentle, yet practical, a person who manages to operate a successful business that doesn’t veer from her own values. She introduced me via email to organizer Claudia Olson, who had put together the first retreat after a gathering of knitting friends had expressed regret at having to break up the group and go home for the night. They joked about just spending the night, Olson recalls. “A friend who did yoga said, I could teach yoga,” she says. “And I said, ‘I can teach tai chi’, and we all laughed about it and went home.” But later, Olson says she “woke up in the middle of the night and said, ‘I can do this.'”

The group is familial, yet fungible. Each time it meets, Olson says, anywhere from one-half to two-thirds of the participants are repeats, creating a sense of camaraderie built on shared experiences, even as newcomers are welcomed seamlessly.

I had packed simply for the weekend: yoga mat and comfortable clothes, including slippers and some hiking shoes, a new knitting project and a bottle of red wine. The last few miles of the drive followed the river on a narrow road, before the turn up a steep, winding hill leading to the Blue Mountain Retreat Center.

I was the last of the 23 participants to arrive, and dinner was underway. I found Olson, who greeted me warmly and encouraged me to grab a plate of food before it was gone. The first night’s meal was a delicious smorgasbord of healthy and filling foods, a 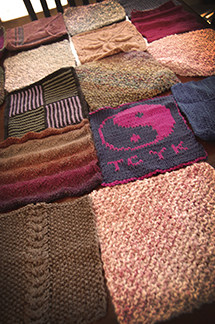 bean and rice casserole, green salad, root vegetables and chewy bread. Erhardt does all the cooking for the center, using the kitchen in her parents’ nearby house. Her food is simple and wholesome, inspired by books like “Laurel’s Kitchen,” as well as some time living in Austria. Others had also brought wine to share. Dessert, a grain-free lemon tart with an almond crust provided by one of the participants, prompted some discussion of trendy Paleo diets.

After dishes were washed (by the group), we settled in for the evening’s activity: knitting. Comfy chairs and sofas are scattered around the main floor, and throughout the weekend there was always a handful of knitters, both relaxed and industrious. Every so often, we would haul ourselves up for a tai chi or yoga class, or to prepare for the available massage and acupuncture sessions, but the easy pulse of the weekend revolved around knitting.

“Nobody has an agenda,” says Olson. In fact, she says, the retreat has grown more laid-back with age. “When we started out, there were a few people who wanted others to know what great knitters they were,” Olson recalls. But that attitude seems to have unraveled – now the skilled knitters work away on their gorgeous projects, cables and lace, infinity loop cowls, striated socks on whisper-thin circular needles, while those of us with more moderate skills feel free to ask for help with tricky directions. Meantime, everyone receives praise – whether it’s oohs and aahs for the first tentative cast-ons done in garish green yarn, or, in Olson’s case, a completed sweater she had designed herself – with a fitted waist and a lacy knitted band that extends from the sleeves across the shoulders.

I found it easy to slip into the tempo of the weekend. After all, what could be easier than sitting in an overstuffed chair surrounded by a group of interesting women? And I do mean interesting – the number of techno-geeks and researchers in the group led me to wonder whether there was a correlation between scientific acuity and the knitter’s brain. Ultimately, it was a convenient excuse for my own haphazard handiwork – I do, after all, live firmly in a right-brain world.

I befriended a woman who works at the National Institutes of Health in Bethesda. Francesca and I took a long walk on Saturday afternoon, nearly a mile down the hill to the river and another couple of miles along a path beside the water. The time passed quickly as we exchanged stories about our children, husbands and exes, our shared fondness for the coast of Maine. Making a new friend was a highlight of the weekend, and it seemed a natural result of the way the retreat is structured – or unstructured.

Olson eschews any formal schedules other than the two or three tai chi and yoga classes posted each day.  I passed on the Friday night yoga, but participated in the mid-morning Saturday class, taught by Marina Gan – a teacher I had met at Charm City Yoga in Baltimore – who also happens to knit. Olson leads the equally popular tai chi classes, and also offers acupuncture, while Erhardt does massage. The bodywork sessions, which cost extra, are done in a mini-spa on the lower level of the retreat center. By the time I arrived, most of the acupuncture and massage spots had been booked (seasoned participants grab the prime slots when they register for the retreat), but Erhardt offered to fit me in early Sunday morning.

The massage was the perfect wind-down to a wholly relaxing weekend. My leg muscles were a little sore from the long walk with Francesca. Erhardt intuitively found trouble spots in my hips, pressing and kneading to ease the tension. After my massage, and a lunch of leftovers, a few of us captured a few more moments of knitting in the sunny great room before heading home. I packed my yoga mat, my hiking shoes, my comfortable clothes, the early makings of the sweater I’d worked on. The wine was gone, but in its place, I had a pottery knitting bowl, the gift that Olson had commissioned for each participant. I’d never seen a knitting bowl before – or maybe I had, but hadn’t realized what it was. Mine has a green glaze and a curved opening to feed the yarn from inside. Olson had asked the potter, Nick Corso, to etch the yin-yang-inspired Tai Chi Yoga Knitters group logo on the side of each bowl and had placed information about the artist, along with a discount card to a nearby yarn shop inside.

A fellow knitter and I decided to stop at Two Rivers Yarn shop in Brunswick, Maryland, on our way home, to take advantage of the discount. I was so inspired by all I’d seen that I plunked down my credit card for a pair of size one circular needles and some fine variegated yarn in soft hues of coral, pink and green. I can’t wait till the next get-together to learn how to actually make the socks. *

Clockwise from top right: The main house at the Blue Mountain Retreat Center can accommodate about 26 guests in shared rooms; knitting; then some relaxing yoga; then more knitting in the great room of the retreat center; an afghan made by members of the Tai Chi Yoga Knitters is ready for finishing