IS LIVING IN INTERESTING TIMES A CURSE OR A BLESSING?

Not long ago I got a profoundly unsatisfying fortune in a fortune cookie. It made me pout, scratch my head, second-guess and even solicit input from the Facebook hive-mind. The words on the slip of paper were as follows: “Your blessing is no more than being safe and sound for a whole lifetime.” 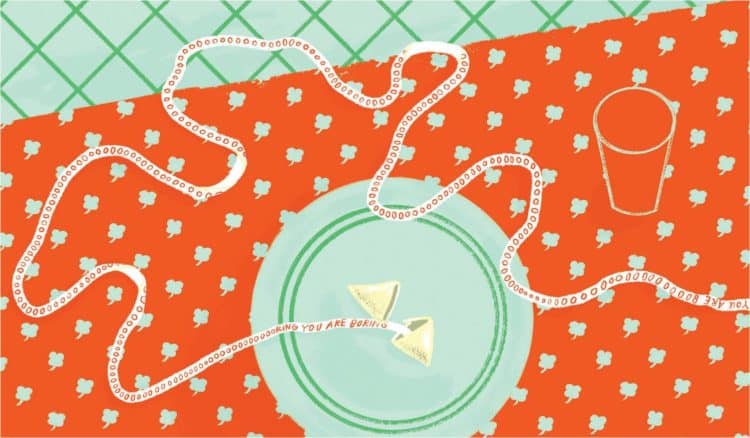 I know, I know. First-world problems. If I were a more evolved person, I would just keep my mouth shut about this. After all, there are billions of people who wish for their lives to be no more than safe and sound. For them, taking a child for routine shots at the doctor’s office would be thrilling. Filling out a health insurance form would be profound. I could go on like this all day: the joy of commuting to work; the pleasure of writing checks; the unique ecstasy of transferring wet clothes from the washing machine into the dryer.

But let’s face it. I’m probably not going to be able to guilt myself into experiencing the safe and sound but utterly mundane activities in my life as blessings. My middle-schooler is working on a science fair project about aerodynamics—which pretty much means that I’m working on it, too. I’ve worked on many science fair projects. They never feel like blessings, no matter how much I want them to, and berating myself for insufficient gratitude toward my daily drudgeries rarely leads to anything useful.

“Your blessing is no more than being safe and sound for a whole lifetime.” Maybe the whole thing would have gone easier if the line had been “no less” instead of “no more.” It would sound like a game show host announc¬ing that I’ve won the deluxe package. And for you, nothing less than the very best, a safe and sound life!

The way it’s written, however, it sounds like a negotiation with a hard¬line lawyer: This is my final offer: you get the basic package, a safe and sound life, and not a penny more. It’s the distil¬lation of my worst fears. I get the basic package. I’ll be safe, but that’s it. I won’t be excited or thrilled or delighted. I won’t be important or special. I won’t be amazing. I won’t be interesting. If I’m safe, I probably won’t take risks—a perfect recipe for boredom.

But I’m tempted to say that I don’t really want to live in uninteresting times, either.

Thoughts about “interesting” and “uninteresting” beg a few questions. What makes an era interesting, versus what makes a person interesting? On paper, I’m the least interesting person you could hope to never have to read about. I haven’t fought in any wars or survived a terrible affliction or even been swept out to sea by a hurricane. No single sentence could be written about me that wouldn’t put a long-suffering history student straight to sleep. Objectively, the safety of my life has also made it very boring.

Subjectively, though, I should be able to experience the safety of my life as a good thing without having to yoke it to boredom. As my 17-year-old said when I showed him the fortune, “Is all that safety a guarantee or a restriction?”

In theory, with all the time and energy I save by not participating in a war or getting swept out to sea, I’m free to do more interesting things— things that are special or amazing or important. Probably something a little more grand than transferring wet clothes from the washing machine to the dryer. So if I wake up every day and sit on the edge of the bed grimacing about the pair of pants I have to pull on and the day ahead—that’s on me, right?

By these criteria, I don’t think I qualify as a boring person. So it shouldn’t really matter that my life on paper is boring, or that I live in uninteresting times, or that my future is safe and sound. Years ago I was on the phone with my cousin and we were running out of the usual family stuff to talk about. No one had died in a while, no one was sick, no one had lost a job. “I guess it’s pretty boring these days,” she said, and I agreed. Then she said, “That’s all right. Boring is good. We like it.”

“No more than being safe and sound for a whole lifetime.” I’m editing that in my head to no less. And now it’s the deluxe package. *