If you dream of being a designer, Lee Andersen can help

The ateliers of Paris and Milan rule the world of haute couture, but there are other gateways to fashion and design. Lee Andersen has opened a portal from her Laurel design and clothing factory that allows entry to anyone with the aspiration and grit to make a longtime dream come true. 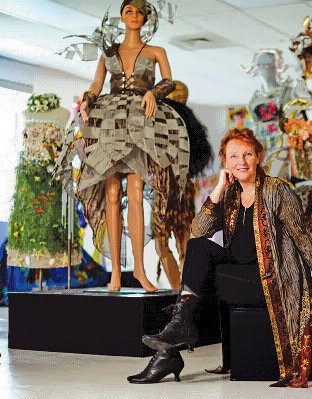 One student is creating a line of children’s clothing—set to debut at an Annapolis boutique. Another is designing a line of hijab-friendly soccer clothing for Muslim women who want to play fiercely but dress 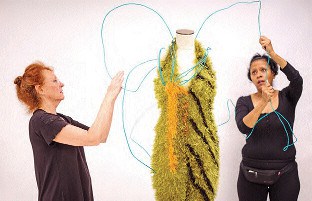 modestly. Yet another, Valerie Cheeves, is knitting lushly textured, eye-popping designs that she envisions celebrities and models wearing.

“I want someone famous wearing my designs,” says Cheeves, who grew up in Baltimore and lives in Harford County. “I want to be on the runways in New York and London.”

The sylph-like green jumpsuit she designed and hand-knitted for Andersen’s annual wear¬able-art event is easy to imagine on, say, Jada Pinkett Smith, one of the people Cheeves would love to design for.

Cheeves, 51, enrolled in May at the Maryland Fashion Institute (MDfin), a new nonprofit venture by Andersen, who has been designing and manufacturing fashions for boutiques and online sales, authoring books on knitting and design, and organizing a festival and museum. Andersen is co-owner of Andersen-Becker Inc., a vertically integrated fashion business in Laurel.

In the last year, Andersen began the Maryland Fashion Institute (MDfin.org) as a school and incubator for aspiring designers, while having access to the factory and marketing infrastructure she uses for Andersen-Becker.

“I decided to go to MDfin because I am trying to learn to sew better, so that I can incorporate my knitting and sewing to create designs,” Cheeves says. “You don’t see a lot of that. I want to be a little bit different.”

She pays a monthly fee to work on a personalized curriculum with Andersen and her business, factory, 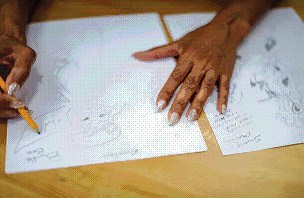 staff and resources, and is learning the sewing skills she needs. Her dream of dressing a celebrity isn’t far-fetched. She has a family connection to the Baltimore-born Pinkett Smith. When Cheeves is ready—with finished designs and the nerve it takes to approach an A-list actor—she plans to reach out through their mutual connection.

Ever since her mother taught her to knit at age 9, Cheeves has loved it and taught others, including all four of her children. Friends and coworkers would commission pieces or buy her creations, but it didn’t pay enough to make a living. For that, she did a combination of home nursing care and 21 years in the Maryland Air National Guard. Five of those years were full-time active duty, including two overseas tours at a U.S. military base in Kyrgyzstan.

As a certified nursing assistant, she works as a subcontractor for agencies in Maryland that provide private-duty home care. It turned out to be fortuitous: Her night shifts include long stretches of sitting with elderly clients, usually when they are asleep, and so she has time to knit.

“I can’t just sit idle—I’m the kind of person who has to be doing something,” Cheeves says. 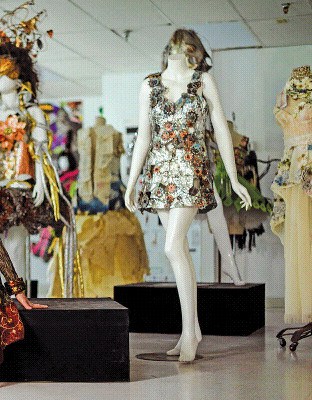 With all but her youngest child now grown, Cheeves has been turning her attention to design, going all 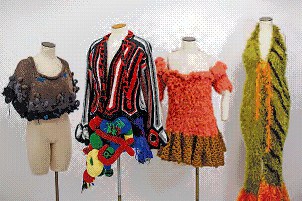 the way with her ideas and inspirations. She first looked into classes at universities that offer design, but realized that she could bypass the four years required to get a degree by enrolling in Andersen’s newly launched MDfin.

Many of those who attend Andersen’s Maryland Fashion Institute have had some level of experience designing and making clothing. But there are also some newbies, Andersen says.

Some of the MDfin students hear about the program through ManneqART, says Andersen. “We have people who don’t have any experience, but design¬ing has always been in their hearts.” Others have technical degrees, but have wanted to add clothing design to their experience, she adds.

The institute is not an accredited degree-granting program, although Andersen says she hopes to seek that at some point. The unstructured curriculum, she says, means that each student can customize the program to their individual needs.

Andersen likens it to a circle: “You can enter at any point,” she says. “We look at where the person is, and what they need and want to know, and do that.” To arrive at the perfect plan, she says, “takes persistence.”

One student had produced clothing and even shot photos of her work and came to the institute for marketing help. Andersen and her team set the designer up with models, photographers and makeup artists looking to build their own portfolios. Andersen even provides a ready-to-shoot mini studio all set up with a backdrop. Photoshop can provide an infinite array of backgrounds from the Chesapeake to the Serengeti and beyond.

Like Cheeves, fellow MDfin student Lena Thompson is focused on her goals. Growing up just outside of Los Angeles, Thompson says she always wanted to be a fashion designer. She moved east to major in design at Virginia Commonwealth University, but her life took a detour. Instead of working in fashion, she built a life around family and a career in the automobile leasing industry. She designed, made and sold children’s tutus on the side, out of her Randallstown home and at farmer’s markets. 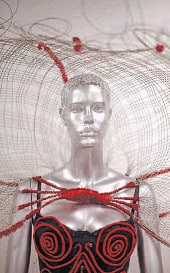 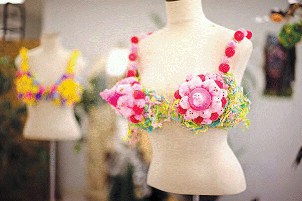 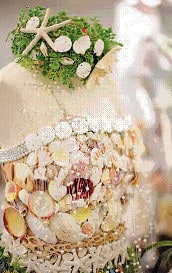 More than 30 years later, in January 2017, Thompson again found herself at a cross¬roads. She was laid off from the job she’d had for 15 years managing accounts for a large vehicle-leasing company. When she began looking for another job, her husband suggested an alternate route.

“He said, ‘Now would be a perfect time for you to do something you’ve always wanted to do,’ ” Thompson recalls. Her dream? To design a line of children’s cloth¬ing. “Fashion has always been my passion,” she says.

She toured Stevenson University. While Stevenson has a strong design degree program, she said, the faster track with personalized advice and instruction from Andersen seemed a more direct route to her goal. Now, less than a year later, Thompson’s clothing line, DeLena Couture, is about to debut at a boutique in Annapolis.

Andersen has also helped her to move into factory production a unique tutu design she had been selling at farmers’ markets and other events. Once the tutus went into larger scale production, Thompson was able to crank out more inventory in less time. The design, stretchy satin lining under the stiffer layers of tulle, makes for a more skin-friendly tutu. The soft lining under¬neath, she says, makes the tutus more comfortable for “the little girls who like to wear them every day.”

Designing is Thompson’s day job now. She goes to the studio and factory at least three days a week, for eight to 10 hours at a time.
“Lee is open to whatever kind of schedule you want to do,” Thompson said. “You choose your own hours.” * 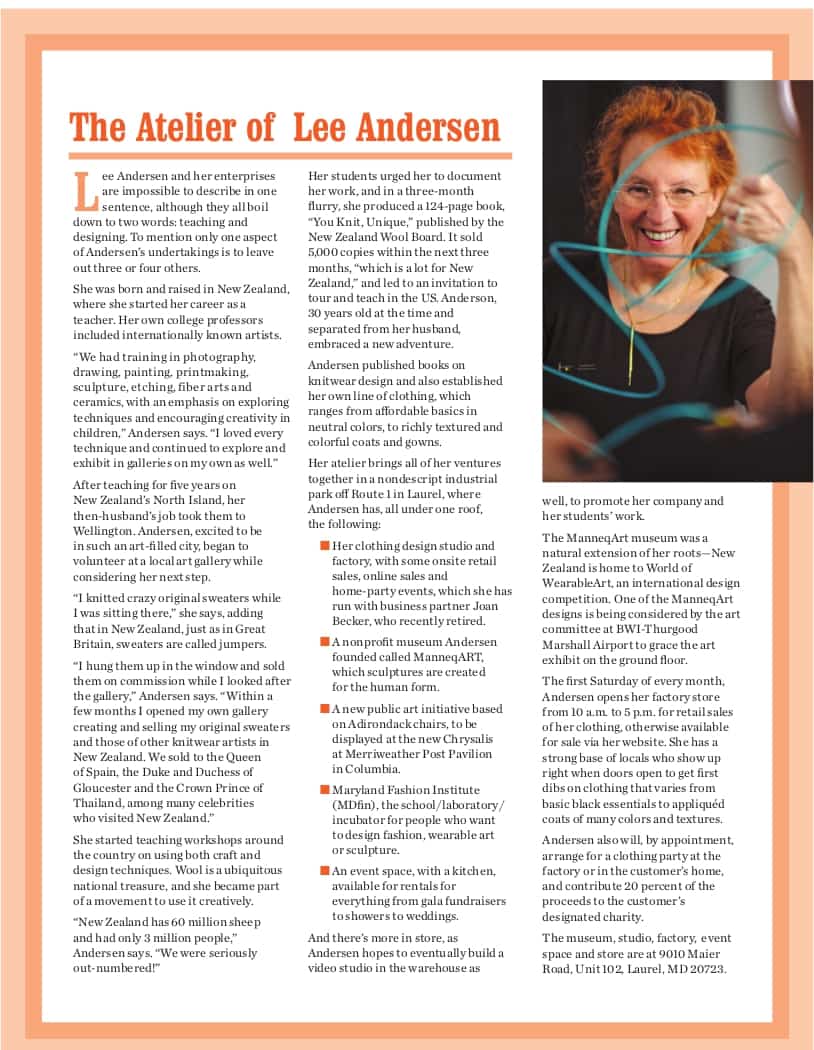