Amy Adler, who grew up in Columbia, was the western Maryland regional organizer 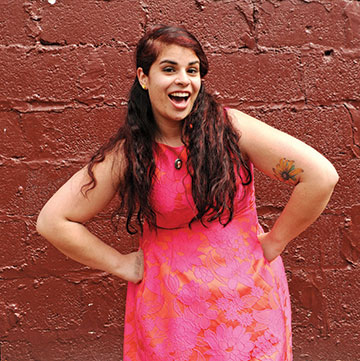 for the Marylanders for Marriage Equality campaign. According to colleagues on the campaign, her fieldwork was an important factor in the unexpected success of Question 6 in some of the more conservative parts of the state. These days, Adler is bringing her experience as an advocate to her new job as the healthy restaurants coordinator for Healthy Howard, while she remains involved in such organizations as PFLAG (Parents and Friends of Lesbians and Gays), where she serves as secretary of central Maryland. She lives in Laurel.

Q How did Howard County compare to other regions in Maryland when it came to promoting marriage equality?
Most of the people I met in Howard County were supportive of the referendum for Marriage Equality. Howard County had the second highest margin of votes for Question 6, behind Montgomery County. Since its inception, Columbia has been known for its opened-minded residents. I definitely had an easier time organizing Howard County than other parts of the state.

Q I recall being somewhat confused by the wording of the amendment – particularly the religious protection language.
Most referendums are worded in a way that can be confusing. The language was to make it clear that we weren’t infringing on people’s religious rights. When I was organizing around it, I would discuss the difference between marriage and matrimony – marriage is a contract with the state, while matrimony is religious marriage. The only thing this legislation was doing was allowing couples to obtain a marriage license. The ceremony itself is a religious decision, and that’s up to the couple and their own church.
Our campaign was Yes on Question 6, Yes on Question 6. As soon as we got the language of the referendum, we hit the ground running with “Yes on 6.”

Q A lot of people believe that as the younger generation grows up and as more and more people realize that they know somebody who is gay, strong opposition will just go away.
Attitudes have shifted pretty drastically since I was growing up in the 1990s. I’m proud to see how marriage equality broke loose after 2012. To me it’s a no-brainer. Everyone should have equal rights; if you love someone, you can marry them, duh. But marriage equality isn’t the be-all, end-all. We have states that have marriage equality, but are legalizing discrimination, based on people who are married. I feel like we’re taking two steps forward one step back. We’ve got a long way to go before we have LGBT equality in this country.

Q I’m interested in the way transgender issues have made their way into popular media with television shows like “Orange is the New Black” and “Transparent.”
Transgender people, like Laverne Cox in “Orange is the New Black,” are bringing the issue forward – about being trans, a trans person of color. They are bringing the challenges of their lives to the attention of the public. Trans rights needs to be addressed immediately. I’m glad Maryland passed the employment nondiscrimination act last year. That was a big step ahead. The LGBT community has really championed marriage equality. But people who are neither LGB or T, need to be brought into the fold – from straight to gender nonconforming. As the LGBT movement moves forward, we’ll bring everyone in.

Q Are you L, G, B or T?
I’m straight. I got involved in the LGBT community when I was little. When I was in first grade, I found out that my best friend’s moms were gay. My father wasn’t too happy about it. I remember being 5 or 6 and I was like, ‘wait, I don’t understand, why are you not cool with this?’ From that moment, I was engaged. I took the marriage equality job for my friend’s moms and had the opportunity to go to their wedding the day after the law took effect. It was an awesome moment for me, working for families like theirs to make sure they have the same opportunities my family has.

Q Tell me more about your family.
I come from an interesting ethnic background; my mom is American Indian, my dad is the son of Holocaust survivors. Coming from a background that is full of inequality, injustice and, yes, genocide, made me sensitive to the needs of people who are oppressed.

Q Has your dad come around?
When I was working on Question 6, I asked him if he was going to vote for marriage equality. He said, ‘Of course, I wouldn’t be your father if I didn’t.’ When he opposed it, it was the early ‘90s – he’s from the World War II generation. It takes a little time. But he’s part of the proof that it’s not just young people on this issue, it’s older people who have changed their minds. Maybe they used to be prejudiced, but have met people who are gay, have sons or daughters or someone in their church who is gay. Something has changed their minds. That’s happening more frequently.
Once LGBT people started to come out, to be more open and say, ‘Yeah I’m gay, but it’s me, I’m still the same person.’ That’s really powerful. I think that’s responsible for the fast pace of marriage equality in this country.

Q How do you bring your experience in advocacy to your new job?
My first job field organizing was working for Congressman Sarbanes in 2006. I bring organizing with me everywhere – it’s part of my life and my work ethic. I use the same strategies with restaurants, making sure they‘re offering everyone healthy options.*