DINNER ON THE GREEN

ALEXANDRA’S RESTAURANT HAS A NEW LOOK. BUT THE VIEWS OF THE GOLF COURSE ARE TIMELESS. 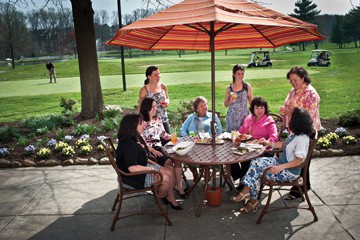 As the sun sets alongside the greens at Turf Valley, the air is suddenly still. The breeze has died some and the cadence of conversation between the last group of golfers on the 18th hole wafts from the fairway. The chatter at surrounding tables picks up, and our server stops by to offer us drinks. We’re outdoors, so something festive and summery is in order – a homemade white sangria, or a cocktail called Roseberry punch, made with vodka, muddled strawberries and sprig of rosemary.

Alexandra’s restaurant, named for the firstborn granddaughter of the founder of Turf Valley, has recently undergone a major transformation, inside and out. And the outdoor patio, long an appealing option for gatherings ranging from post-game to pre-nuptial, is now a comforting place to lounge in a soft-cushioned wicker chair to sip a cocktail or sit at an umbrella-topped table to enjoy a meal.

Along with its renovations, the restaurant has also appointed a new chef – or rather, re-appointed: Russell Svoboda, who left the executive chef position at Turf Valley four years ago to work for the Great Sage, is back in the kitchen. The experience of working for the vegan owners of the Clarksville restaurant and nearby Roots market, he says, “made me more conscious when it comes to clean and healthy ingredients.” He looks for local foods from sustainable producers, he explains: “As much as possible we’ll be using locally sourced food and build the menu around that.”

In summertime, that philosophy is a pleasure to practice, says Svoboda. “Summer is great for everyone in Maryland: there’s Silver Queen corn and fresh berries and peaches. All these things are at their peak.” When the season draws near and it’s time to come up with a new menu, Svoboda makes a grid listing all the foodstuffs available in one column and matches them to his favorite recipes. Because the menu at Alexandra’s is American-themed, and some of the regular patrons are reluctant to give up their favorites, Svoboda says, he’ll stick with some traditional dishes such as chicken wings and steak, “and mix them up with things that show my culinary upbringing.” He pictures a tenderloin steak served with baby spinach, fresh corn and roasted green chili risotto.

When people eat outside, he says, “they may steer toward something a little lighter,” so the new menu includes “tasting” portion plates for a handful of entrees: smaller cuts of steak and smaller portions of such dishes as the white truffle scented sea scallops. When Alexandra’s re-opened in March, after its renovation, Svoboda designed the Chesapeake salad, a plate heaped with a variety of fresh seafood, including a couple of mega-shrimp, sea scallops, lobster and a heap of lump crab. “I thought it would be nice to have,” he says. Until the orders started rolling in. It’s turned out to be the most popular lunch item, and the chef expects it to be a favorite of the patio diners.

The newly furnished patio is part of a $1 million overhaul of Alexandra’s restaurant, renovations, says designer Joanne Mangione, that were a long time coming. When it opened in 1988, the restaurant followed the template of many hotel dining rooms, with soothing florals in pastel colors and soft seating. “We were very feminine,” she says. One of Turf Valley founder Nicholas Mangione’s 10 offspring, Joanne knew that some elements of the existing design were sacrosanct. The tile her father had imported from Italy, for example, a light palette in the lobby and hunter green “verde” in the downstairs dining room, she says, “had to stay.”

Following the consensus of the Turf Valley board that the dining room should be “more masculine” in keeping with the golf and business clientele, Mangione has created a “Mad Men” vibe, with dark stained floors (a wood look-alike made from eco-friendly porcelain tile), a palette of celadon green, deep blue and “a lot of chocolate,” she says. A large chandelier of 13 mid-century-style drum lights hangs from the soaring atrium, and can be controlled by dimmers when the considerable natural light flows through the two-story windows facing the golf course.

Inside or out, Alexandra’s facelift, completed in late spring, brings a new fine dining establishment to Howard County – not only for those who are here for a business meeting, conference or special event. Chef Svoboda, for one, is enthusiastic about the new décor. “When I walk out into that space, I feel like I’ve been transplanted to New York or Beverly Hills,” he says. As a chef, he’s inspired to make sure his kitchen “rises to the occasion.”

But the outdoor views have been there all along. A seat at the edge of the golf course on a peaceful summer evening, Svoboda says, “is unlike anyplace in Howard county.”