WHAT DO WOMEN WANT?

I just barely remember my first cup holder. It was probably in a Volvo I was test-driving for the New York Daily News back when I wrote for the 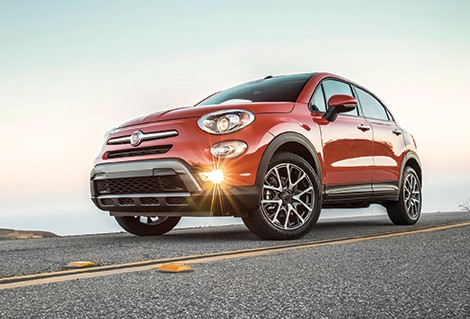 paper’s automotive supplements. Enthusiasts – the type whose criteria for a good drive involved horsepower and four-on-the-floor – poo-pooed the innovation, while most women I know saw it as the best invention since the wheel itself.

While a really good place to stow a purse continues to evade automotive designers, in the last two decades, many of the features to gain traction have been influenced – if not designed – by women. Security features like automatic locks and lights that stay on for a few beats so you can get into the house, storage bins and cargo netting to hold the groceries in place, minivans with convertible seats, heated windshields, hands-free communication and my personal favorite, no gas cap to unscrew, are now so ubiquitous, most of us can’t remember the days before these features existed.

Though women (who represent the majority of new car buyers and generally have the last word when a family heads out to the dealership), appreciate a good drive, we also like our creature comforts. “Her Mind” was recently treated to a trio of test drives. Every car had a cup holder, of course. Here’s what else we found.

CUTE AS AN ADOLESCENT
I was so excited about the Fiat 500X. A sucker for a cute car, I’ve long coveted those zippy little Italian hatchbacks that remind me of my childhood 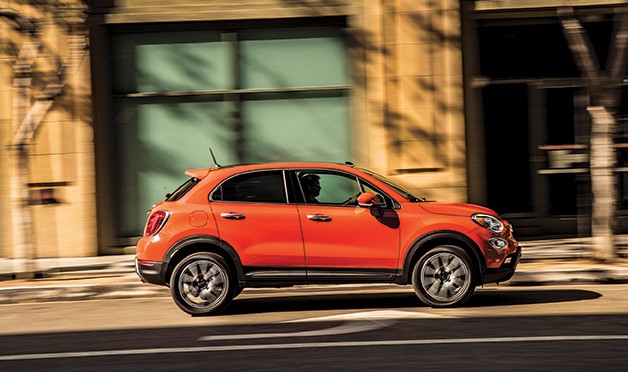 Matchbox collection. Sadly Fiat has decided, like Mini Cooper and Major League Baseball, that a dose of steroids never hurt anybody. The 500X is as cute as an awkward 13-year-old (meaning, not). Sure, it’s diminutive for an SUV – in fact, it’s smaller than the Mercedes (opposite page) – but it doesn’t have any of the flair of Il bel paese. The Blanco Gelato (white) Lounge version I tested had some spiffy trim features – contrast piping and a classy 500 logo on the black leather seats, for example – a blind spot warning system and, like all the cars I drove, an easy Bluetooth interface. While the Fiat picked up some nice speed on the highway and was a nimble lane-changer, on shorter trips it lacked pep. Here I’ll quote a fellow driver: “You put your foot on the accelerator and it just looks at you.” Sounds like asking a teenager to empty the dishwasher.

NOT YOUR MOTHER’S MERCEDES 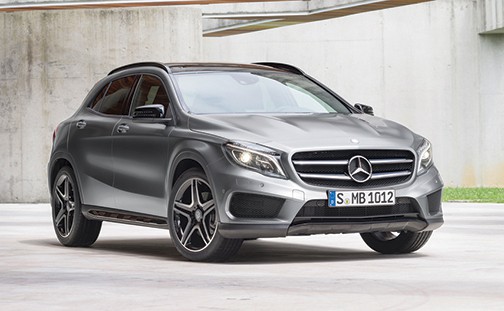 The Mercedes GLA250 is a small, sporty crossover, an entry-level hatchback that looks more like a Nissan Rogue than the sedan your best friend’s dentist dad once drove. It’s fun knowing you’re behind the wheel of a Benz, but unfortunately, you might not be turning heads. Even with its signature star front and back, the sloping silhouette with its bug-like headlamps doesn’t necessarily scream Mercedes. It’s got a solid, beefy stance with standard 18-inch wheels and roof rails. Inside, the GLA-class is cozy, with adjustable lumbar support in the heated seats and reasonable, but not generous storage space (plus a power liftgate that lowers with the touch of a button). The back-up camera, part of the multi-media package in the Mercedes I tested, isn’t standard. But this beloved feature – for anyone who has experienced it – will soon come in all car models (as it did in all models included on these pages). The National Highway Transportation and Safety Administration has mandated a phase-in beginning in 2016. As for the drive, the GLA has an automatic stop-start system, powering down at stop lights and then starting up again – often without warning. It’s also slow to respond to acceleration, so isn’t recommended for those who like a little pep.

Sarah Warfield, left, general manager of Neubauer’s Auto Repair, has been working for the company since 2000. She received her AMI accredited 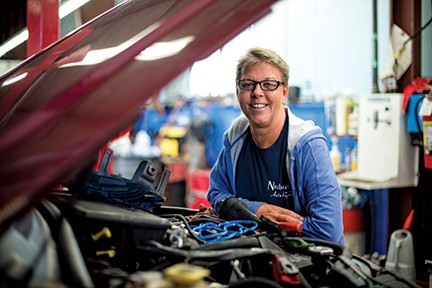 automotive manager degree in 2005 and has encouraged the Neubauer team to become more female friendly by going through Ask Patty certification – a process on how to communicate more effectively with women and ensure they feel safe, respected and empowered. This enables the shop and its mechanics to build lasting relationships with women customers.

We asked Warfield for tips on car readiness as we move into what is predicted to be another tough winter season.

TIRES
If you have a front wheel drive car, you always want the better tires up front. In an all-wheel drive, if the tread varies, it could potentially damage the all-wheel drive in the car. It’s important to make sure that not only tire treads are in good shape, but that tires are properly inflated. If your tires are underinflated, they can get cupped. If you run your hand along the tire, you’ll feel little worn spots. It’s caused when you drive on underinflated tires. Tires should be rotated and balanced every 6,000 miles.

FLUIDS
Fluids, including antifreeze, power steering, brake and transmission fluid are all vital to your car’s health – like blood pumping through a body. We all know how important it is to change the oil. The industry says to change it every 3,000 miles. If you use synthetic oil, you can do it at 6,000. Oil lubricates and travels through the engine. You don’t want dirty oil. It can start to thicken and stick to the valves and the pistons. It’ll gunk up and your car will start burning oil. It can create engine sludge; lack of oil maintenance can ruin your entire engine.

Maintenance intervals should be determined by age as well as mileage. Say your timing belt is due to be replaced at 90 thousand miles, and the car only has 60 thousand on it. But the car is eight years old. Eight years of living in Maryland through summers and winters can do a number on the belts. Sometimes these components get worn by age, not by mileage.

OTHER
It’s important to check little things: your wiper blades, the lights. We don’t always realize when the brake lights go out. Also, check your spare tire. I can’t tell you how many times I’ve heard from someone who got a flat and went for the spare and found that it was flat. Or it wasn’t even there.
While you’re at it, take a look at your car insurance. You might have roadside assistance, or you can add it to your policy for very little money. This can help a lot if you get into trouble.

In the winter, I keep a survival kit: jumper cables, fix-it flat, a pair of gloves and a flashlight. If I’m by myself and something happens to my car, I’m prepared.*