Recently, a customer hurried into StyleFinds with a dilemma. The woman had to attend a funeral on short notice and had nothing to wear. A few minutes later, she walked out with a full suit for $22.

That’s one kind of customer, says Janina McNinney, who opened the consignment shop in the Harpers Choice Village Center last September: the customer on a mission. And there’s also the type who likes to browse and see if any treasures might reveal themselves among the racks of clothing or carefully arranged table settings and accessory displays. 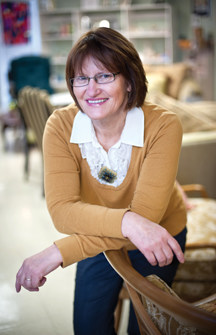 StyleFinds seems to have something for everyone. The entry is stocked with fitness equipment, and off to the left is the furniture section, where carefully created vignettes of sofas, chairs and tables are arranged to make you feel that a hostess might appear at any moment with a cup of tea or a martini. To the right, in the main shopping area, are rows and rows of clothing, accessories, shoes and jewelry in a range of styles, each with an easy-to-read price tag.

Opening a consignment store had long been a dream for Janina McNinney, and when she found this 5,000 square-foot space, in what was once the KinderCare child care center, she was able to realize that dream.

Growing up in Lithuania, the youngest of 10 children, McNinney (nee Dius) had a knack for sales at an early age. “Even as a young girl, I was always buying and selling things,” says McNinney, 55. “I would buy something and then turn around and resell it to a friend. In college she studied commercial property management. At the age of 24, she became a construction manager supervising 70 people, mostly men.

“Some of these men were as old as my father,” she says. “They did not like me telling them what to

do or correcting them when they made a mistake.” Even so, the job had an upside: “I was learning how to run a business.”

Even then, McNinney continued to purchase items of clothing to resell to her friends. “It was a hobby of mine.” Well, maybe more than a hobby: McNinney says she would drive from Lithuania to Estonia to purchase clothes and then go to Poland to sell them. She would smuggle clothing in pillows hidden in the body of her car, wrapping pants into tight cylinders in wrapping paper and placing them under the hood.

“When we got our independence, customs was always checking what we had with us so we had to get creative and hide a few things,” she recalls.

At the same time, she held various sanctioned jobs over the years in Lithuania, each one growing in scope and responsibility.

“When you are a construction manager you are taken to the site and shown the ground and that’s it. They say here is your ground. You are responsible for finding the vendors, determining the budget, everything,” she said. She also became involved with a man and they had a son, but the relationship did not last.

McNinney was preparing to open an auto parts store with a business partner when friends in the United States faxed her a green card application document. She and her sister, Vale, each filled one out. Vale’s number came up in the lottery and she moved to New Jersey before eventually settling in Owings Mills. In the spring of 2001, McNinney made her first visit to the states.

“I never thought I’d stay here,” she said. “Everything is so different and I was struggling with the language.”

She once saw a dead deer on the side of an Owings Mills road, and saw the same deer three days later. “I thought to myself, ‘what kind of country lets that happen? That no one would clean that up and 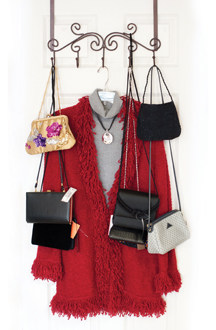 have no respect for nature?'” McNinney couldn’t picture herself living in the U.S.

She returned to Lithuania, but her son, who wanted to attend college in America, persuaded her to give the States another try. So in August 2001, McNinney and her son, Aivaras Saduikis, returned to visit colleges. They moved in with her sister, and Aivaras enrolled in Howard Community College.

On her second trip to America, McNinney says, she felt more at home. “I was in better place, more settled.” She started to think it would be nice to meet someone, she says. And unbeknownst to her, Aivaras had created a profile for his mother on an Internet dating site – and had been writing replies to potential suitors on her behalf.

One of them, realtor Scott McNinney, captured her attention. They began dating, and after a brief courtship, he proposed to her near the Bay Bridge – one of her favorite sites in Maryland. The couple now lives in Ellicott City and recently celebrated their 10th wedding anniversary.

After moving to the U.S., McNinney worked in bridal shops in the Baltimore area and then earned her real estate license and helped to sell units in the Maple Lawn development. But deep down she knew what she wanted to do: open a consignment shop.

The dream started to take shape one day as she walked with a friend through the Arundel Mills Mall in December 2010, McNinney spotted signs posted in the windows of the Liz Claiborne shop. All the store’s fixtures were for sale. Clothing rack after clothing rack – circular, rectangular, hanging from doorways or protruding from the sides of the walls – all of it was up for grabs.

“I said to my friend, ‘This is my chance’,” McNinney recalls. “Everything started happening from there.”

McNinney also grabbed display cases from a Hallmark store that closed. “I had no building, nothing, and no place to put any of it,” she says. The items were stacked high in the family’s garage.

She began to spend her free time driving around Columbia, looking for a building that would eventually become her consignment shop. When she saw that KinderCare’s building was for sale, her search for a location ended.

A NAIL GUN FOR CHRISTMAS

Now, McNinney arranges a row of women’s suits on a rack and smiles. “I am very excited about this store, everything we have done so far,” she says, her accent offering a window into her Lithuanian heritage. “It very smoothly came together.”

But that seeming ease is mostly due to McNinney’s hard work. Before the place opened, she scrubbed the shop’s floors, installed crown molding, painted the walls and built display cases from recycled scraps of wood. She hasn’t had a day off since opening. And when she isn’t at the store itself, she is scouting the mall looking for trends and conducting her own research on pricing.

For Christmas she asked her husband for a nail gun, a miter saw and a compressor and received all three.

“I was so happy with those gifts,” she says. “I wanted to do it all myself. I wanted a place that was nice, clean, organized and upscale. A place where everybody can find something they like.” Now, McNinney has four part-time employees, and McNinney is looking for a full-time manager.

Part of the attraction of a consignment shop, to McNinney, is the idea of people exchanging clothing and avoiding waste. “In America, people throw out a lot that is still good, still valuable,” she says. “They get tired of something and out it goes.” Instead, she says her philosophy is, “let’s not throw things away, you work too hard for the money to do that.”

McNinney says her customers run the gamut. Some are affluent, “and live in 7,000 square-foot beautiful homes,” while others may not have a lot of money to spend. They may be in transition, searching for or starting a new job.

And in this economy, McNinney says, some of her consigners are people who are moving away for a new job, or are downsizing into smaller homes or apartments. Whatever the scenario, “there is always a lot to get rid of.”

She encourages her consigners to share her philosophy. “This is not about making money. This is about less waste.” But that doesn’t mean her consigners don’t make money. She tells the story of a woman who came to the store with clothing she was unable to sell at a yard sale. On consignment, those same clothes netted her $250.

As for the customers, she says “everyone can look great for a small amount of money.” *