CONFESSIONS OF A BOOMERANG KID

CONFESSIONS OF A BOOMERANG KID

“Are you going to make a career out of going to school?” My dad has been asking me this question ever since I told him it’ll take me an extra year to finish graduate school – which means another year of living at home.

I should have known it would be tough. After graduation, my parents tried to help me move out of my apartment, about 40 miles from their house in Perry Hall, but instead of helping they made the process 10 times worse. My mother criticized me on my packing and insisted we didn’t have space for all the furniture and appliances I planned to haul home. I would have to give it all to a friend, donate it to charity or toss it.

Yes, I’m a boomerang kid. I graduated from McDaniel College in 2010; it’s 2012 and I’m still living at home. The economy was not in the best shape when I graduated: The unemployment rate was 15 percent for those aged 20-24. Plenty of college kids move back to their parents’ homes after graduation. While the figure of 85 percent made the rounds in the media last year, when a few journalists tried to confirm the frightening statistic, they found no evidence to back it up. (Indeed, it was traced to a now-defunct website.) Even so, Pew Research Center reports that – because of the tough economy – around 21 percent of college graduates, aged 24-34 are either living with their parents now or have lived with them temporarily within the last few years. And that figure is 29 percent for the entire age group, regardless of educational achievement, Kim Parker, a Pew researcher, told National Public Radio. Even that figure, 3 in 10, she points out “is a pretty substantial number.”

I made sure I had a plan before moving back home, and that was to continue my schooling. Another Pew study showed that when the recession hit hard between 2007 and 2009, many young adults aged 18-34 settled for jobs they didn’t really want just to make ends meet, while one-third went back to school.

The appeal of grad school is it allows student loan payments to be deferred. But the downside is, you rack up more debt. When I was accepted into a graduate program at the University of Baltimore, I wanted to live in the city. But my father, a financial advisor and a certified public accountant with a master of business administration degree, thought otherwise. After I graduate with my masters, I will owe more than $75,000 in student loans. He pointed out that I wouldn’t be able to afford to live on my own without either (A) getting a full-time job or (B) using even more student loan money for rent and living expenses. 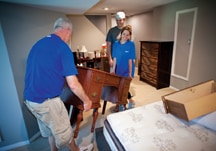 Plan A was an idea waiting to fail; I knew my part-time waitressing gig wasn’t going to cut it. My college roommate had tried something similar – she’d moved out of her parents’ house because she didn’t get along with them. She barely makes ends meet. In fact, when I spoke with her recently, she had no idea how she’d pay the $600 rent. “I’m gonna ask my landlord if I can just pay double next month,” my friend told me. Asking her parents for money is out of the question. Her dad has been unemployed since 2010.

Another friend, Rachel, chose plan B. A student studying social work at Temple University, she used student loans to pay for her apartment in Philadelphia, not far from her classes. After living on her own for a few short months, she opted to move back home. Her mother had broken her arm and needed some extra help. But Rachel realized it was a cost-effective choice.

According to my dad, Rachel wasn’t too savvy when she used student loans for rent. “Taking out student loan money to live independently is the stupidest thing I have ever heard of in my life,” he said. Student loans have interest rates of 5-10 percent, depending on the creditor. “Credit is for emergencies only,” he told me. “You don’t want to

live off of credit, unless you want to be homeless.” My dad, concerned that my current debt will pose difficulties, was unwilling to co-sign any more student loans.

As it turns out, my dad doesn’t mind my presence at home. There are rules, of course: I check in periodically to let my parents know where I am and where I am going (this one drives me crazy); I let my parents know in advance if I plan to stay at a friend’s for the night so they don’t stay up worrying (understandable), and during the week, I come home at a reasonable hour and try not to wake up the family (I’m not very good at this one). If I break any of these rules, nothing happens. I just disappoint them, which is punishment enough.

So here I am in my childhood bedroom. Every day I struggle to get homework done with my “stay-at-home mom” hovering around. My sister is 16, and my brother just went off to college. My mom has too much time on her hands, and when she’s bored she enjoys cleaning and rearranging my room. Things are always disappearing or missing, including homework assignments.

About a year ago I was taking a required class in my program that required a grade of B or better to meet the degree requirements. Class was held on Saturdays for six hours, and it was dreadful. The professors gave us multiple, overlapping assignments and printing out each project cost a small fortune. For one assignment, I created a 12-page booklet with a hard cover that was expensive to print out at Kinko’s. I spent Friday night finishing up and was happy with the results.

The next morning I woke up before 7 a.m. to go to class and COULDN’T FIND MY PROJECT. I was frantic. I am not a morning person. After digging in the garbage for

20 minutes, I found a brown Kinko’s bag. Inside was my book, wrinkled and stamped with a lovely imprint of last night’s pizza. My parents heard me freaking out in the kitchen and rushed down. My mom had thrown it out thinking it was trash; after an exchange of some harsh words, I ran upstairs to get ready for class.

When I returned, I found my mom ironing my homework. She thought it would flatten the wrinkled pages, but the iron had melted the ink and the booklet was now an illegible mess. I was mortified to present the project to my professors and classmates during critique. It turned out okay: My professors allowed me to reprint the book, and my Mom covered the Kinko’s bill.

At times living at home makes me feel trapped. And privacy – what’s that again? Looking at the alternatives, however, I realize I don’t have it too bad. I don’t have to pay rent. My mom cooks dinner almost every night. The house is always stocked with groceries. My mom even does some of my laundry, but that usually means a few missing socks.

According to Pew, 68 percent of the young adults who have temporarily moved back in with their parents say they are very satisfied with their family life. I guess you could say I’m satisfied. *