A COMBINATION OF STRENGTH – BOTH PHYSICAL AND MENTAL – AND AGILITY IS REQUIRED FOR THIS CHALLENGING SPORT. PLUS YOU GET TO CHAT.

During a team-building exercise I attended not long ago, the seminar leader tried to construct a sports metaphor. “It’s not like rock climbing or rappelling,” she said, “solitary sports where you’re not interacting with other people.” In my seat I gasped a tiny gasp. Rock climbing is decidedly not a solitary sport. You are never alone and you are interacting with people on the most primal of levels. Your lives are, quite literally, in one another’s hands.

Rock climbing is an intensely social activity. Much time is spent scoping out what you’re about to do, trying to figure out how to do it better once you’ve done it, and watching and learning from someone else doing it. And while you’re standing on the ground searching the wall for clues, you chat. While two people are climbing, their two belayers chat. While you’re looking around for your next ascent, you chat. And even while on the wall, you chat. I’ve been engaged in many a conversation that started when I was on the ground, continued until I climbed out of earshot, then resumed as I was lowered to the ground.

Of course, climbing is far more than a social activity. It requires strength, agility and concentration – as well as trust. With all bias, I will say it’s a perfect exercise, and one that you’ll be compelled to stick with. I’ve found that I need to climb at least twice a week to maintain the endurance and strength I’ve built up since I began climbing several years ago.

Once exclusively an outdoor sport, rock climbing was limited to warm climates and seasons; daylight hours; and relatively dry, calm conditions. Indoor climbing walls were first introduced in the 1960s, mainly as a way for hard-core climbers to train off-season. But soon, gyms began putting up climbing walls – enabling climbing not only for people of all levels, but climbing after work, on stormy days and in limited time windows. All the packing of gear, driving out to remote areas and dependence on dry conditions is eliminated by indoor gyms.

I started rock climbing in 2005. With fond memories of scrambling over rocks as a child, I signed up for a three-hour beginner’s class at the Earth Treks gym in Columbia.

First we learned the basics: the required special equipment –(climbing shoes, a harness, ropes and related gear). We learned basic tie-in knots and how to belay (pronounced buh- LAY, it literally means “to make secure,” but in rock climbing, the term refers to how the rope attached to a climber is handled to ensure the climber doesn’t fall). 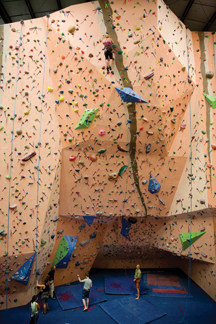 Here’s how it works:

The walls at the Columbia gym vary in height; the highest is about 45 feet. Hundreds of plastic hand and foot are bolted into the vertical surface of the wall, all marked with colored tape to indicate various routes, rated from easy (5.5) to exceptionally difficult (5.12 and beyond).

A long rope is hooked over an anchor at the top of the wall – the climber ties in to one end, her belayer takes the other, so they are attached. The person belaying threads the rope through a device and that allows her to halt the climber easily if she falls. After the climber and the belayer are all set, the partners double check to make sure everything is done properly.

When I first looked up at the wall, I wondered if I would ever be interested enough to puzzle through the challenges presented by these lumps of plastic and strips of tape. Would I feel inspired to make my way to the top by following just one route – all the while trying to master moves that require balance, agility, attention, endurance and strength? Nearly seven years later, the answer is an emphatic yes.

After about an hour of going over the basics, my classmates and I partnered up and tied in for our first try on the wall. At first it’s exhausting – working muscles in unfamiliar ways, even for those who lift weights. But it’s also exhilarating to reach the top of even a 20-foot wall. At the end of the class we tied bandanas over our eyes and climbed blind. Taking away sight canceled out a natural fear of heights, and I was surprised at how much I could do.

After I completed that three-hour class I discovered a new group of friends; many are now my regular climbing partners. And the rock climbing gym is among the most social places I’ve ever been.

My friends at the gym have revealed a range of reasons for climbing: my: My husband/partner climbs; my husband/ partner doesn’t climb; it’s a sport I can do year-round; its challenges are different from those of other sports; it was on my bucket list; I tried it once on vacation and enjoyed it. But people keep doing it because it is fun – and it’s a workout for both your body and your mind.

While she enjoys climbing outdoors Carol Dix, a member of my climbing group, says she comes to the gym for both the exercise and the social aspect. “We’re all really supportive of each other and have a good time,” says Dix, a Catonsville resident who works at Safelite Auto Glass. And the level of climbing difficulty doesn’t matter, she points out. “Beginners can climb with experts with no problem; all you need to know is how to belay safely.”

Barb DeNearing, a research nurse at Johns Hopkins Hospital initially came to the gym with a friend. The Abingdon resident, who has since become a skilled climber, says she gets “a rush” from mastering a particularly challenging climb – and loves watching others do the same.

The addiction comes from constantly challenging yourself to get to the next level, says Mollie Selmanoff, a high school student at the Park School in Baltimore, who got into climbing after attending a few birthday parties at the gym. Now she’s a star on the Earth Treks climbing team.

Kate Ewald of Ellicott City, who has been teaching climbing for 15 years, is an instructor at both the Columbia and Rockville Earth Treks locations. She also coaches the gym’s climbing teams, working with kids aged 9 to 17. Climbing is “pretty much a whole-body exercise,” she says. It’s strength training, cardio and core training all rolled into one. Ewald points out that climbing burns more calories per hour than running. “You’re using all the parts of your body together,” she says. And climbing “is not boring – it engages your mind as well as your body.” 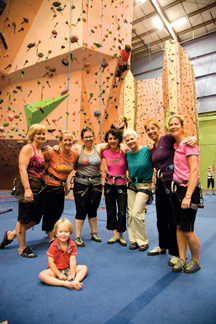 The real challenge of rock climbing and what makes it distinct from other sports is its requirement of brain power. The figuring-it-out aspect sets a climbing workout apart from, say, walking on a treadmill or lifting weights. Being mentally present on the rock wall is absolutely necessary. The instant you stop paying attention, you can lose your grip – literally. Every climb is a puzzle, and every puzzle mastered feels like a triumph.

At the climbing gym, those puzzles are, for the most part, mapped out for you in color-coded routes. When climbing outdoors, it’s up to the climber to map out the route as they go. “Outdoors,” says Carol Christian, another member of our group and a Baltimore resident who works as an astronomer at the Space Telescope Science Institute, “there’s more figuring out.” Carol Dix chimes in saying outdoors “is definitely scarier.” The climber’s adage is that on an outdoor climb everything you need is there, you just have to find it. Places where you think you can put your foot might be too slippery for purchase, and places where you thought you’d never be able to fit a single fingertip wind up feeling like the side of a large bucket.

Lisa Shepherd, an Ellicott City resident who teaches high school math, calls climbing, especially climbing outdoors, “active meditation.” A skilled, longtime climber, Shepherd says, that, when she’s climbing, “the noise of life fades away as my mind and body work together with the rock, focusing on finding the solution to finding the way to the top.”

Climbing outside also comes with all the critters that live in nature. Snakes, chiggers, spiders and the like. A few years ago climbing outside at a small rock face at Alberton Rock in Patapsco State Park, one of our less outdoorsy members froze about half way up the 30-foot climb. As we all yelled, “what’s the matter?” he remained silent and immobile. Finally he called down, “there’s a giant spider.” And sure enough, from the ground we could see the creature – about six inches in diameter – an arm’s length from him. Both he and the spider were completely still, he in fear, the spider just hanging out doing its spider thing. “Climb past it… climb past it…” we all yelled as we waved our arms upward. For a long moment he didn’t move a muscle. Then, finally, he inched his way past his nemesis and made it to the top.

PS: As proof of the appeal of climbing, the photographer for this piece joined the gym after shooting the assignment! *