The Chesapeake Shakespeare Co., (CSC) now in its 10th season, is not all Shakespeare all the time. The CSC, says Sandra Barton, communications manager, calls itself a “classics theater;” in addition to the two shows it does each summer –often alternating between Shakespeare and a classic play, the company stages productions in the fall and winter.

So far, when the CSC ends its summer season at the Patapsco Female Institute Historic Park, a former girls’ boarding school, it has moved into various borrowed digs, including the Howard County Arts Center in Ellicott City and Oliver’s Carriage House in Columbia.

It’s no wonder, then, that CSC couldn’t resist the opportunity to take over a historic building, the landmark 1885 Mercantile Trust and Deposit Company at 200 East Redwood Street in Baltimore. 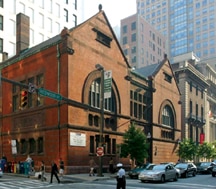 The company hopes to transform the striking space into a “modern Globe,” says CSC artistic director Ian Gallaner, referring to the theater where Shakespeare originally staged his plays. The new space creates an expanded opportunity for indoor productions, as well as much-needed storage for sets and costumes. The 20,000-square foot building will be renovated with the help of the architectural firm Cho Benn Holback and Associates, Inc., in time for a debut in early 2014.

Attendance at CSC productions has increased 30 percent in the past year, says Barton. The new space “gives us the opportunity to expand into Baltimore metro,” says Barton. “We have a whole plan of more productions and more educational outreach.”