CREATING A CAVE FOR THE MAN IN YOUR LIFE

STORY BY Carol Sorgen
When architect Karen Pitsley needed more room for her office, her husband, Scott, lost his “man space” in their Highland home garage. Turns out, that’s not a problem.

The couple built a new two-car garage to replace it. Scott may have gotten the better end of the deal, Karen laughs. His space, she says, “is actually cuter than th 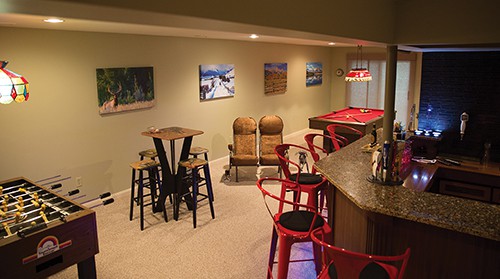 While “cute” may not be the best description for a man cave, Scott’s new retreat is outfitted with every thing he needs – a dining table donated by a friend, area rugs, a wall-mounted TV and sound system.

“Every Sunday, that’s where you can find him, with a cigar and a friend,” says Karen.

While the notion of men’s personal spaces in the home can be found in basement workshops and recliners in front of the television, the designation “man cave” most likely took off after the 2007 launch of DIY Network’s show, “Man Caves.” Episodes on the program have included building spaces for NFL players, NASCAR drivers and USO troops in Kuwait. Baltimore’s Ace of Cakes host Duff Goldman was featured on the program in 2009.

“Mom has her kitchen or craft room, the kids have their playroom, but men don’t usually have a dedicated space of their own,” says Pitsley, who has designed about a half dozen men’s rooms – so to speak — and says she can’t think of a man who wouldn’t want a room of his own.

But don’t take the word “cave” too literally. A man cave doesn’t have to be dark, dingy or even underground. It might be the attic, a repurposed bathroom, an outdoor shed, a garage, or yes, the basement. “They just want a place they can call their own,” says Pitsley.

For Michael Appleby the basement did indeed become his retreat, reclaimed from the room once used by his kids. Once the offspring were launched, Appleby eyed the space in the Columbia home he shares with his wife, Wendy, an interior designer. He decided to redo the bar area, updating it in walnut cladding with a granite countertop for a “clubbier” feel, he says. 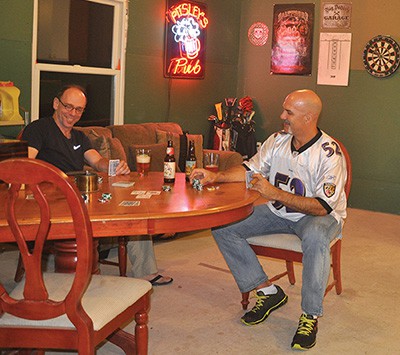 The rest of the lower level retreat is outfitted with Michael’s toys – a pool table, Foosball table, Vegas slot machine and an authentic movie-style popcorn popper for snacks to accompany the requisite beer. But there are also such personal touches as photographs of Jackson Hole, Wyoming, where the family frequently vacations.

While the room isn’t off limits to females (sliding doors lead out to a patio with a fire pit, a favorite spot for entertaining), Wendy gets a kick out of seeing Michael head downstairs on weekends to have a beer at the bar and watch a golf game. “It may not be decorated completely to my taste,” she says, “but it’s filled with things he loves and I enjoy seeing him use it.”
You can certainly go all out on a man cave. Witness the Sykesville project Karen Pitsley designed for Francis Kirley, which includes a screened porch (with motorized screens) fashioned to reflect his love of New Orleans. There’s an outdoor grill and kitchen with authentic, working gas lights from the Big Easy, as well as a lower level with fireplace and TV to watch football games. “This is his place of refuge after a long day and is in keeping with his desire for the finer things in life (including the 25,000 bottles of wine housed in the home’s wine cellar/cafe),” says Pitsley.

A man cave can be a new outbuilding or extension to your home – if budget and space permit, says Pitsley. But any unused space can be transformed into a retreat for the man of the house, she points out. “Look at existing spaces first,” she advises. “You can claim an entire room or even a portion of a room. A man cave is whatever and wherever the individual man wants it to be.”

Wendy Appleby agrees. “Don’t be stuck by the parameters of what you think a man cave should be. Make it personal. This isn’t a TV show. It’s a room for the man you love.”

WHAT SHOULD A MAN CAVE INCLUDE? 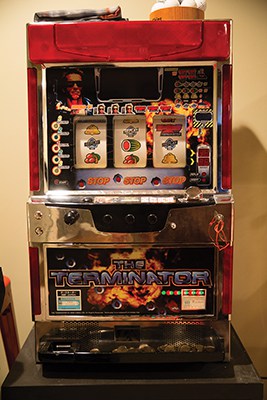 There are no hard and fast rules for what you might want to include in your man’s retreat, but here are some popular items.

■ A bar fridge And if there’s a bar and bar stools to go along with it, so much the better.
■ Flat screen TV Remember, it’s for a guy – the bigger the better.
■ Comfortable seating Unless your guy’s a hermit, make it inviting for him to have his buddies over.
■ A keg-o-rator Need we say more?
■ Games Cards, board games, table games, and of course, video and computer games.
■ Surround sound system Noise proof the room if you must.
■ Sports/exercise equipment Why not help your guy get in a workout at the same time?
For more information:
Karen Pitsley Transforming Architecture transformingarchitecture.com
Wendy Appleby Your Home by Wendy yourhomebywendy.com*