BUILD Your Retirement | Virtual Village links its members to services

The Village in Howard (TVIH) is an innovative new program offering social, cultural, educational and recreational resources to those who wish to age in place. Modeled after the successful Village at Beacon Hill 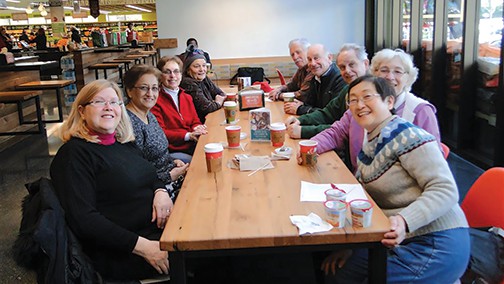 in Boston, the all-volunteer nonprofit program is targeted to those who are determined to retain their independence. It is not a “village” in the literal sense, but rather a virtual “family” of people who help themselves and others deal with the challenges that accompany different stages of aging.

The village was officially launched in January 2015 after several years of planning by a nucleus of about a dozen Howard County residents that included Judy Pittman and Mary McGraw. Pittman says she realized that sometime in the future she would need to get by “with some help from her friends.” So she became a charter member, paying the $350 annual fee, which entitles her to transportation, a volunteer who will help her with yard work, and group activities that include walks at local parks, educational presentations, a bridge club and evening social events. Meetings are held in library meeting rooms, where the topic for a recent discussion group was the Iran Nuclear Agreement.

An all-volunteer organization, TVIH is a “vibrant, virtual community,” says Pittman. Though still in its infancy the organization is experiencing growth that surprises its founders, she says. It recently established its first paid position and hired an executive director. Of the 84 current members, 43 are active volunteers who received training. Recently, a new volunteer was happy to help a house bound 80-year-old hang pictures and arrange the furniture in the new apartment he had moved into after downsizing from his large Howard County home.

Other volunteers provide rides to doctor appointments, grocery stores and the like, and every member receives a list of professional service providers such as plumbers, electricians and lawn care professionals. When a member needs help with meals, volunteers chip in to help out. “It takes a village to raise a child,” goes the saying. The TVIH includes folks long past childhood.
Pittman encourages people to learn more at the organization’s website, thevillageinhoward.org.
– Mary Lou Baker