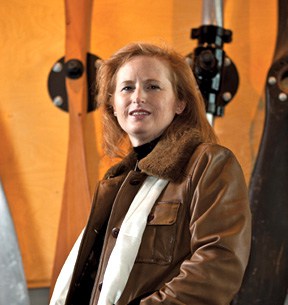 Ask someone to name an early pioneer woman pilot and chances are about 100 percent they’ll come up with Amelia Earhart. Bold, brave, dashing, she broke records, dared to fly over the ocean, was lost at sea. It’s a story everyone knows.

What most people don’t know is that she was far from being the best woman pilot of her time. In fact, there were many more just as daring, some of them much more talented. Women stunt pilots whose daredevil antics were captured on films like “The Perils of Pauline”; women who flew under bridges; women who were willing to risk their lives, again and again, going up in planes that were little more than flying crates.

And most have no clue who they were.

Heather Taylor made up her mind to change all that. Her documentary, “Breaking Through the Clouds,” which had its premiere in 2010 and will be shown at the Columbia Festival of the Arts this June, tells for the first time the tale of 20 women pilots who flew in the country’s first women’s air derby in 1929, a nine-day cross-country race from Santa Monica to Cleveland.

The tale is riveting, the archival footage a wonder, the women themselves fascinating. There’s Pancho Barnes, for instance. Overweight, androgynous, wildly generous, a cigar smoker who could swear like a sailor. Ruth Elder was a gorgeous starlet type. Tiny Chubbie Miller once managed to kill a snake that had crawled into her cockpit, while continuing to steer her plane. Every one of them worthy of attention.

“This was something I had to do,” says Taylor, who grew up in Tennessee in a family of pilots. Though her father and several brothers all fly, aviation had never been her passion. On a trip back home while working on her master’s in film at American University, Taylor interviewed a woman pilot in her 80s, who mentioned the women’s air derby in passing. Taylor was immediately riveted.

“It just clicked,” she says. “I’ve been around aviation all my life and all I’d ever heard of was Amelia.”

So she started looking into it. It was 1997, and the Internet was still in its infancy, so research had to be done the old-fashioned way – calling one person after another to track down contacts. In the end the project would take 13 years, cost hundreds of thousands of dollars, mostly from loans she still struggles to repay. But there was no way to resist. “It grabbed me by the throat and said, you’ve got to do this. Nobody was touching it. I just felt an obligation to do it,” she says.

Taylor got a job as a production manager working at the Discovery Channel for a decade, concentrating on the film in off-hours. In 2007 she left her job to work on “Breaking through the Clouds” full time.

The 90-minute film (Twenty minutes were cut in order to qualify for certain film festivals; the DVD contains them.) is fast moving and totally engaging. The women faced tremendous obstacles during the cross-country race – Chubbie Miller got lost at one point, landed in a field and had to ask the farmer for directions; Margaret Perry contracted typhoid fever and had to drop out; Marvel Crosson crashed and died. At each stopover, exhausted, the women were expected to attend fancy dinner parties, dressed in formal wear, which they often had to wear under their flying uniforms.

There were incidents of sabotage, too. None were ever traced to specific perpetrators, though there were theories. “The women didn’t want to make a big thing of it, they were afraid others would say it was just girls complaining. They didn’t want people to discredit them as pilots,” Taylor explains. In the end, though, 16 of the 20 women who started the odyssey made it to the finish line.

Will Rogers, the well-known commentator of the time, dubbed it the Powder Puff derby, a name that stuck and was applied to every subsequent women’s air derby. Sexism, of course, was rampant, especially in the newspaper coverage; male resentment bubbled up throughout. Still, many of the women later pinpointed the race as the highlight of their lives (Taylor was able to interview a number of family members. The last living pilot, Bobbi Trout, had died shortly before the filmmaker reached her.)

The most important thing to the Taylor, “the reason I did the film,” she says, “was the passion the pilots had in their eyes. I wanted to capture that sparkle, convey it to others so they can do what they want to do. Even if it’s not about aviation.”

She was also drawn to the pilots strong personalities. “They were different, very different,” she says. “Some of them had a hard time finding their way in society after the race.”

Each of the women has a story. Thea Rasche, who was German, ended up working for the Nazi Party so she could continue to fly. (“She had to, it was in her blood,”Taylor says.) Ruth Elder married six times, Pancho Barnes, four (Despite the androgynous appearance, “she liked her men,” Taylor laughs). Chubbie Miller was charged with murdering a lover and later acquitted. Many came to tragic ends: Several died in plane crashes, a number ended up poverty-stricken. But they all maintained their passion for flying.

“I was almost envious of them, that they found something that made them shine like that,” Taylor admits.

Aside from filmmaking, Taylor has quite another passion – the mythology that surrounds horses. “All cultures have stories about horses. I’d like to tell a story that shows how horses can show both the feminine and masculine, how they come together,” she says. “That’s my ultimate dream.”

But for now, Taylor is immersed in the world she documented in her film. She has shown it at film festivals and at aviation shows, picking up an impressive number of awards along the way: Best Documentary at the Chagrin Documentary Film Festival, winner of the Combs Gates Award from the National Aviation Hall of Fame (an award presented by Harrison Ford), among them. The film was recently accepted into the Women’s International Film Festival in Miami.

Taylor is equally proud of the fact that her film prompted the Women in Aviation’s Pioneer Hall of Fame to induct all 20 of the women pilots featured.

The story of these brave pilots grabbed her and doesn’t seem to have let her go. Taylor is trying to figure out other ways to present all the information she uncovered in her 13-year quest.

And after that? “There are all these amazing women’s stories out there,” she said. “I’d love to do a women’s history film festival. These are stories we need to show.”