BOYS WILL BE BOYS 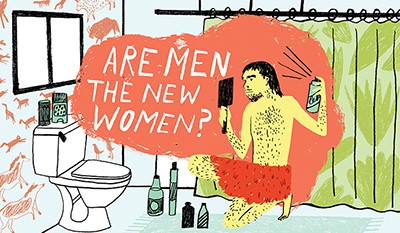 When I learned in 1988 that my first child would be a boy, I was nervous. I had grown up without brothers, with almost exclusively female playmates, and would be confronting
the mysterious culture of boyhood for the first time. I didn’t even know what I didn’t know. At the time I couldn’t have identified either an athletic cup or a video game controller.

On the other hand, I was excited. Raising young men to believe in gender equality was a way of striking a blow for feminism, I thought. I would make sure my sons had no doubt that women and men are equally capable, valuable and independent. Of that, at least, I was confident.

Soon I was the mother of two boys, two years apart. Despite the fact that there was no male role model (i.e., no man) in the house for much of their childhood, both were unmistakably male. I sometimes tried to get them interested in cooking or playing with dolls or putting on a play, just so they’d be well rounded. This was a complete waste of time.

Instead, our life was sports: games, teams, practices, equipment, endless professional contests blaring from the television. Our life was fighting: offhand sparring, more intense wrestling, the occasional all out beat-down.

There were all manner of boards: skate, snow, boogie, surf and wake. There were gallons of milk, billions of eggs, trillions of Hot Pockets. When they came of age, there were six packs of beer, cases of beer, kegs of beer, and related vocabulary: kegstand, ice luge, handle, beer pong. There was loud music, guitars, recording equipment, band practice, gigs. There was detention, suspension and a few times, there was court.

Under the mattress, there was a picture printed out from a site called hotbabes.com, or something like that.
Okay, okay, I gave in: masculinity was not entirely a social construct. And to the extent that it was a social construct, society was a whole lot bigger than me.

On the other hand, there was some intriguing evidence that gender roles were changing; bobbing along on that river of testosterone were things I didn’t expect.

Let’s start with steel-cut oat groats, which my son asked me to buy the year he was a senior in high school. While I had heard of steel-cut oat groats, I didn’t know what they were and was unaware of their impressive glycemic index as compared to regular oats. They appeared on my shopping list when my older son started reading about diet and nutrition in one of his magazines or websites or self-help books, which I also didn’t expect to see.

I thought magazine subscriptions, fad diets and self-help books were for girls, but I was soon to find out otherwise. My son had joined the hordes of young men in his age group who were discovering the Paleolithic lifestyle. This involved living the way the cavemen did, eating only the finest organic grass fed beef and heirloom vegetables and engaging in endless, mindless hours of physical exercise.

Having finished unloading his wallet at Whole Foods (or better yet, having his mother take care of it), Paleolithic Man went to the gym, where he was known to dead-lift 400 pounds, after which he indulged in the protein shakes of the Iron Age. Paleolithic Man did not eat pasta, he did not drink lattes, and he was very suspicious of the ingredients his mother put in her casserole. Late in the Paleolithic Era the discovery of vodka allowed this awesome, disease- and body-fat-free creature to make vast advances in his ability to hunt and gather women.

So as you can see, this was a very manly fad diet.

Even more unexpected than the fad diets were the beauty products. Ruffians my sons were. Metrosexual they were not. So I was amazed at the number of hair, skin and bath potions, not to mention colognes, my boys accumulated. Their fragrances may have been named things like Landslide, Ice Storm and Xtreme Tsunami, written on the labels in angular typefaces, but at the end of the day, the boys’ bathroom was as cluttered as any girl’s.

In addition, I really hadn’t expected them to be so softhearted. Both of my sons were inconsolable during breakups. One lay on the couch for a whole summer after his girlfriend dumped him. One cried and punched the wall and checked Facebook every half hour to see what his ex was up to.

Perhaps this is not all a result of historical forces – maybe boys have always been like this, and I just didn’t know it. Or maybe I just raised a couple of pussycats.

A recent study conducted by “Time” magazine and the Rockefeller Foundation showed how much things have changed since I first started worrying about the patriarchy. Really, the whole thing is falling apart.

In 1977, 72% of men believed in the traditional household setup: men should work and women stay at home. Today, only 42% of men hold those opinions. (That’ll work out well, since 38% of women agree.)

According to this survey, men now spend 13 hours a week on housework; women spend 17. In child care things are even more fairly divided. Gen Y dads reportedly spend more than four hours a day on child care, equal to or better than the moms.

And I think my self-help-book-reading, hair-product-using, nutrition conscious sons are going to fit right into this trend. My older son just changed jobs and moved to a different city to be near his girlfriend, who goes to dental school. My younger son, who has good looks and expensive tastes, and throws a great dinner party, will make a perfect trophy husband for the career woman with a weakness for bass players.

The boys have a much younger sister, now entering high school. Not so long ago, she asked me if it was true that women sometimes get paid less to do the same job as men. She had a very hard time believing it. In her generation, girls are expected to be achievers; they make up 60% of college graduates.

Are men the new women? Are women the new men? Answer: We might be nearing the point where those questions don’t make much sense. *