Bond on the Run

A message arrived on Joy Emery’s phone just as she was putting her son and daughter to bed one night. The text bubble glowed: “I’m in your kitchen.”
It was her neighbor and running buddy, Jessica Klingebiel, who had just put her own two kids to bed and was laced up and ready to go.

Several times a week, the two women run together. Never in the morning, though sometimes in daylight and sometimes with kids in strollers. Most of their runs begin after their kids are in bed and their husbands are at home. It’s dark by then, but they have each other – and flashlight apps on their 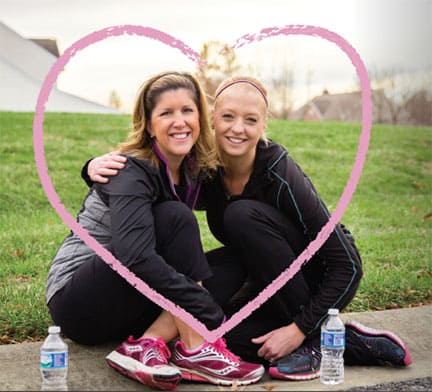 In the beginning of their relationship as running buddies, it was Emery, the veteran runner and fitness instructor (she owns Fit4Mom in Howard County), coaxing along Klingebiel, the newbie. Over the last three years, as they became fast friends and then something more like sisters, Emery and Klingebiel have each been transformed by the relationship.

Emery has had workout buddies before, but it was always a kinship that revolved around the discipline of meeting to run at a regular time. Klingebiel, newly moved to Elkridge, didn’t run at all, but had wistfully eyed Emery jogging through the Marshalee Estates neighborhood.

The two busy moms – both in their late 30s with children of the same ages (7 and 4) – had a chance to talk one day as Emery and her kids were walking past Klingebiel’s house.  “I see you running all the time,” Klingebiel told her. “I wish I could run.”  Emery suggested that Klingebiel join her one day. “We’ll take it slow,” Emery recalls saying. “We can run part of the way and walk part of the way. We’ll only do two miles.”  And here, in the telling, Emery laughs, recalling Klingebiel’s reaction. “And she said, ‘Two miles?!’ ”  “That seemed really far to me then,” Klingebiel admits.
TALKING AND RUNNING
With Emery at her side, Klingebiel found that the minutes and the miles went by quickly. They spent the time talking and getting to know each other. At first, Klingebiel would have trouble catching her breath enough to chat while running.

“I remember saying to Joy, ‘You do the talking,’ ” Klingebiel says.  And Emery did. During that first run she found herself telling Klingebiel all about her life, including the traumatic loss of her father, who was murdered several years ago.  For Emory, a therapist, running had always been therapeutic. “Running has gotten me through my hardest times,” she says. Her master’s thesis, she says, “was on how running and working out is more beneficial than anything else for your mental health.”

Still, she was surprised by how much she loosened up on those runs with Klingebiel. “I don’t know if it’s a chemical thing in your brain or what – you could tell almost a complete stranger your life story,” Emery says.

Klingebiel has also grown to depend on running for therapy. “The mental health thing is huge for me, too,” she says. After a bad day, that’s a night when she will knock on Emery’s door to say, “Come on. Let’s go.”

OPPOSITES ATTRACT
When it comes to a mind-body approach to exercise, a good workout partner is invaluable, says Shawn Chevalier, a trainer and owner of Hard Body Outdoor Fitness, which organizes workouts in Ellicott City and Columbia. “When you have a partner who is looking to you for inspiration,” he says, “You have the opportunity to relax a bit and be in a good state of mind.” 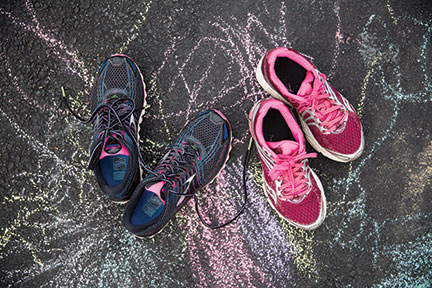 Motivation to stick to a workout schedule is the obvious reason most seek workout partners, but other, more subtle benefits, come to light when you find the right person to run or work out with, Chevalier says.

What makes for a good workout buddy? Sometimes it just happens organically, as with Emery and Klingebiel, but other people reach out through their existing networks, join a gym, sign up for a class that incorporates paired training – the strategies are limitless.

The important thing is not to limit your search to people who share your fitness level. Chevalier warns against thinking that it has to be a relationship between equals, fitness-wise.

“Pairing up with someone who is not at your fitness level can be much more effective,” Chevalier points out.  It goes without saying that the less fit member of the pair or group will be working a little harder, pushing herself more than if she were working out alone. But Chevalier says there are also benefits for the more fit partner.

“For one thing, they have an opportunity to coach,” Chevalier says, which may have its own benefits. “If you’re always running longer and longer to train for a race, then you have a chance to dial it down a bit,” in the spirit of camaraderie, Chevalier says. “You can enjoy it more. I know I do.”
A good training program should have intense days and easy days built into it. The more fit partner can choose to push herself on solo days.

Last October, Klingebiel, who has lost 30 pounds since her first encounter with Emery – when she was aghast at the idea of running two miles – ran the 13.2-mile half marathon in the Baltimore Running Festival.  Emery, on the other hand, doesn’t care to race or train for long distances, keeping her runs to three to five miles on any given day. In addition to her work as a therapist, she leads the Fit4Mom Stroller Strides running program, in which parents run with their children in strollers.

“That was when we reversed roles,” Emery says. “She became the runner and would say, ‘Come on! Come run with me!’ ”

The two have had amusing adventures. One particular nighttime run sticks in their memories. First, Klingebiel stepped on a frog – which made a sound the two women will never forget. Nor are they able to adequately describe the noise for anyone who wasn’t there. Later, when they were just a few yards from Emery’s home, a box literally fell from the sky in front of them, stopping them dead in their tracks. Panicking and thinking it was a bomb, Emery called her husband, who came outside and inspected. It was a weather balloon, with attached instructions to send it back to NASA.
The two women love to laugh at their disparate political views, musical tastes and approach to parenting. An online quiz about “Which TV Mom Are You?” yielded Carol Brady for Emery and Roseanne Barr for Klingebiel. Yet, they find plenty of common ground. After a 30-minute run, they sometimes stand in the driveway chatting for another hour.

“I read once that if you don’t find your best friend by the time you’re 30, you won’t find her at all,” Klingebiel says. Her friendship with Emery proves that wrong – sort of, she said. “Joy is family to me now.”