Rec and Parks’ sports programs don’t leave anyone out 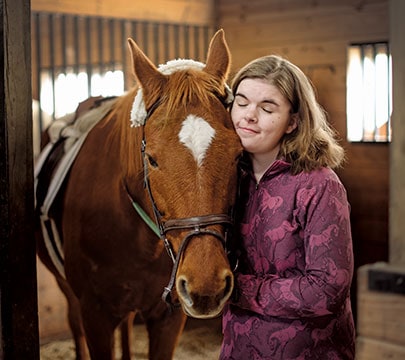 there’s swimming. Somehow, she also manages to fit soccer into her schedule.

“I’ve been doing sports most of my life. I love it,” says Jones, a Columbia resident who participates in both Special Olympics Howard County and Howard County Recreation and Parks Department therapeutic sports program.

Jones, 33, a graduate of Wilde Lake High School, doesn’t have a favorite sport, though she has advanced enough in Special Olympics volleyball and swimming to become an assistant coach in both disciplines. “I’ve made a lot of friends through sports,” she says. “I enjoy playing the sport and being with them.”

Susan Potts, recreation manager for the county Recreation and Parks Department’s inclusion services, oversees 23 different programs, from basketball and bowling to soccer and swimming. Some, like swimming, are in partnership with Special Olympics. 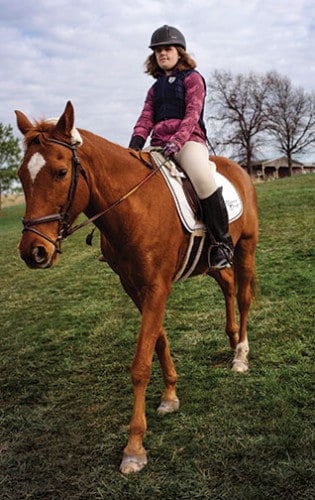 “Howard County has a large population of people with developmental disabilities, intellectual and/or physical,” says Potts. “Traditionally, they lead sedentary lives. It is critical to combat that lack of activity. Otherwise, they might sit and watch television all day.” But there’s more to these programs than physical activity. Therapeutic sports, says Potts, “enhance participants’ quality of life, enhance their self-confidence.” In addition, she says, they develop participants’ “ability to be adaptable.”

Last spring Zoë participated in track, held at Oakland Mills High School. She could see well enough to distinguish the white lane lines on the black track surface. At first, she wouldn’t go far, and she needed guidance even for a short distance. But during each practice, she was able to walk a little further. By the end of the season, Zoë could walk the perimeter of the track by herself.

Shortly afterwards, Zoë’s mother got a call from the special education school she attends. Zoë, who was once escorted from class to class, no longer needed that help. “She walked to her classes by herself, an accomplishment her mother attributed to her participation in Special Olympics,” said Mikulis. “She had enough self-confidence to do it herself.”

Potts says the department tried offering adaptive programs but couldn’t compete with the existing programs in Washington, D.C., and Baltimore. Among them is Baltimore’s Adaptive Recreation Services, a nonprofit that offers “high adventure” sports like outrigger canoeing, wheelchair soccer and snow skiing.

Inclusion refers to instances when those with disabilities participate in a sport whose rules, playing field and/or equipment might be modified to allow them to play with their peers in a team setting.

Potts’ focus is inclusion. She points to the lacrosse program, which uses standard rules but also modified sticks and restricted physical contact. Not all offerings succeed, though. A strider (aka balance) bicycle program didn’t attract enough participants to make it a go. 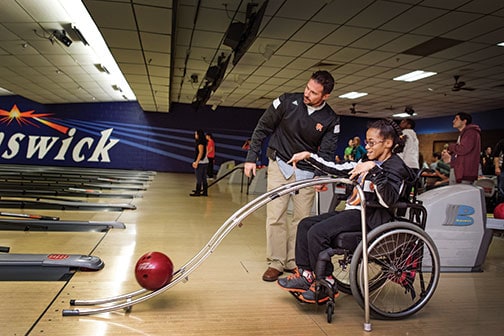 One of the department’s oldest – and most popular – programs is bowling. Potts can often be found on Saturdays at an Ellicott City bowling alley where 80 participants, ages 13 to senior citizen, play in four leagues. The program uses standard scoring but also ramps into which balls are inserted.

“For many, it’s a social event. Some keep score for Special Olympics rating. Others find it a challenge even to be in a bowling alley – loud and busy, food smells, waiting your turn,” Potts explains. Recently, an autistic teenage boy was able to do without the ramp and throw the ball on his own. “It took two years to get him to that point,” she says.

Chuck Struhar, program consultant, estimates 160 young people participate annually, of whom about 40 percent are nondisabled. All teams are coed for fall soccer, winter bowling, and spring softball and golf.

“It is as close to the regular athletics program as possible,” he says. Student athletes wear uniforms, have pep rallies and cheerleaders, and can earn varsity letters.

In soccer, for instance, the ball and the field are smaller than standard, and rules are adjusted as 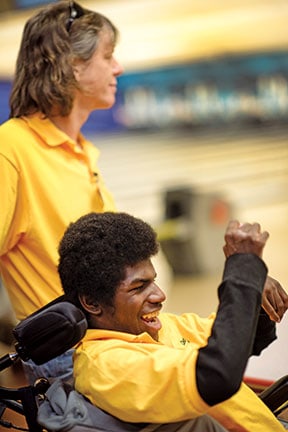 needed. “A person in a wheelchair couldn’t ‘run’ the full soccer field,” Struhar says. “But they’re still playing the sport. They’re still getting the joy of accomplishment.”

In 1996, Bob Baker got involved in Special Olympics Howard County through his daughter, Stephanie, then 12. “She loved participating, not only for the physical fitness but as a social activity,” says Baker, a computer scientist and Elkridge resident who serves as the organization’s director.

Over the years, Stephanie, now 31, has participated in several Special Olympics sports, from bowling and cycling to golf – “her least favorite but she does it for me,” says Baker, who plays alternative-shot golf with his daughter, the two averaging 55 strokes for nine holes.

Stephanie’s favorite sport, though, is swimming where she competes in the 1500-meter, or 60-length, events. “When she started, we didn’t have too many expectations of what she could do,” Baker says of himself and his wife, Peggy. As it turns out, Stephanie is an accomplished long-distance swimmer. “We are very proud of her,” said Baker.

Christine Towne, a 28-year-old Ellicott City resident, began participating in Special Olympics a decade ago. Like Jena Jones, Towne is involved in one sport or another year-round. Volleyball, basketball, track and field, and equestrian, Towne runs through the list.

“I do them when they are offered each season. I like the sport. I like the healthy lifestyle. I like being on a team,” says Towne, who serves as a Special Olympics “global messenger,” giving talks at fundraising events and sporting competitions.

Alex Barnes, a 35-year-old Columbia resident, has participated in Special Olympics swimming and tennis, but his favorite sport is bowling, where he is currently training to assist as a coach. “I’ve been bowling for 20 years and I needed a change from competing to coaching,” he says.

In 2014, Barnes attended a national Special Olympics bowling tournament, held in New Jersey. He remembers it fondly. “I met athletes from different states,” says Barnes. “I can’t think of a better experience than that.” *

—–Inclusion refers to instances when those with disabilities participate in a sport whose rules, playing field and/or equipment might be modified to allow them to play with their peers in a team setting.—–